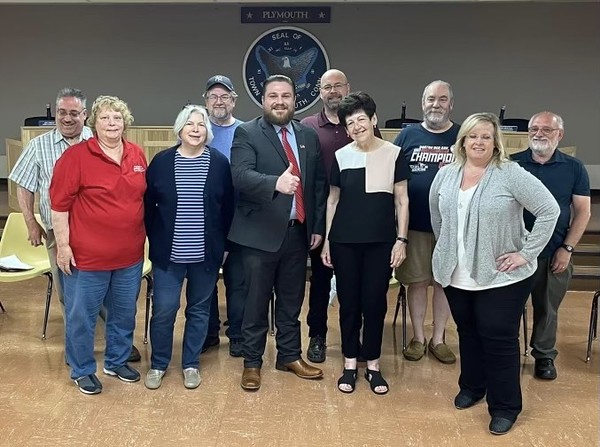 Courtesy photo Joe Hoxha has received the endorsement of Plymouth and Bristol Republicans for candidacy of the 78th District State Representative seat. Buy this photo
Published on Saturday, 21 May 2022 18:39
Written by Dean Wright

A convention was held in the Plymouth Town Hall where Hoxha was chosen. Hoxha thanked those who supported and continue to support him in his bid for election.

“Plymouth and Bristol have always been and will be close to my heart. We now need to unify as a party and look towards November where we need to make sure we usher in a new generation of leaders to save our great state, because this may be the last chance we have to do so.” said Hoxha in a statement.

Eager to speak with voters about their concerns, questions and issues, the candidate said he also wished to focus on Connecticut’s crime, education and high cost of living.

Hoxha wishes to restore police protections and “give power back” to parents in their children’s education while holding state government accountable. He said he wishes to halt the progress of critical race theory being taught in public schools and wants to see stronger pushes for funding in the infrastructure and education of smaller towns.

“This state has created an environment where we draw in more takers than makers, all at the expense of the little guy, the mom and pop store, and the factory worker that breaks his back for what was once a good life in this state but that has now become a borderline unbearable place to live,” he said. “And I think the evidence for that is the nearly three quarters of a million people that have fled down south in the last few decades.”

Hoxha’s family is originally of Albania, but moved to the U.S. when he was three-and-a-half-years-old. He shared that his family settled in Bristol because they felt the community had good schools and manufacturing jobs. During his time in Bristol Public Schools, he exhibited interest in politics and the history of the U.S. and said he would spend countless hours reading biographies about presidents. He noted he has lived in the West End and wrestled and played soccer for Bristol Central High School.

The candidate graduated from the University of Connecticut with dual degrees in sociology and political science. He spent two years working on Republican campaigns while traveling through Virginia, Missouri, New Hampshire, Texas and Connecticut. He serves on the Republican State Central Committee and works in finance.