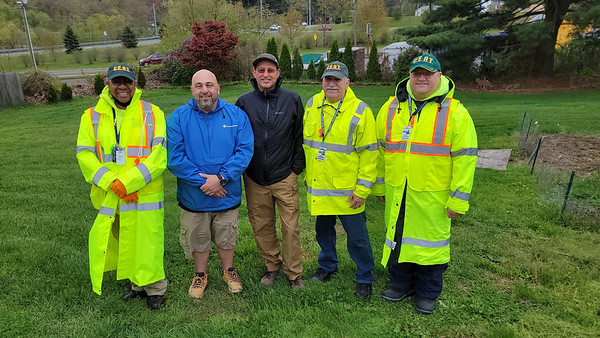 Hereâ€™s a photo of the folks from CERT who volunteered at the 8th Annual Pine Lake Fishing Derby this past Saturday.

According to Donna Gionani, left to right are Deborah Dorsey, (Bristol captain) Michael Montelli, Andy Marano, Bob LaChase and Donovan Ward. Iâ€™m also told that Leo Bonola from the Forestville Village Association was on-hand to help out with things.

Born in China on Feb. 2, 1926, he was the son of Yee Dip Wong of 6 High St. in Bristol. He went to Patterson School and worked at the family laundry on High Street across the Bristol Public Library.Â

He entered the U.S. Navy on Apr. 1, 1944, and became a seaman first class in the 15th United States Naval Construction Battalion. He trained in Virginia and California before being shipped to Honolulu in 1945.

He served in the Southwest Pacific and died at Okinawa as the result of multiple injuries received in an accident while on duty aboard ship.

(Note: I believe the Wong family ran the laundry operation on High Street for decades.)

Among those from Bristol who had success as an actor was Vera Lockwood, born here on May 17, 1917. She was nominated for an Emmy Award in 1999 for an appearance on â€śNYPD Blues,â€ť â€śMurphy Brown,â€ť and shows like â€śDoogie Howser, MD.â€ť

A graduate of Bristol High during the mid-1950â€™s, â€śBig Alâ€ť went on to play football for Syracuse University, where he blocked for Jimmy Brown. He played in the Canadian Football League for just over 10 years, and was inducted into its Hall of Fame in 1996. He is one of Bristolâ€™s greatest athletes of all-time.

He died at age 78 in 2005, and Iâ€™m glad to have met him when he visited Bristol for his high school reunions, as well as Bristol Sports Hall of Fame induction and Tramps recognition dinners.

Contact Bob Montgomery at bmontgomery@bristolpress.com or by calling 860-583-5132Â