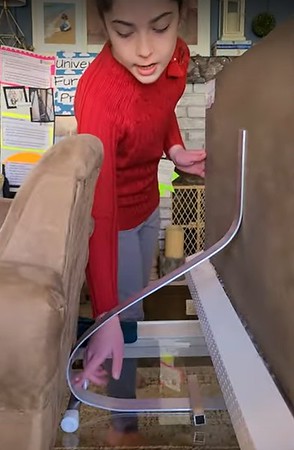 BRISTOL – Emerson Dell'Aera, fourth grader of Edgewood School, is headed to the Invention Convention U.S. Finals in Dearborn, Mich. due to her universal furniture protector invention.

Dell’Aera was one of two chosen Bristol Public Schools students for the honor after creating their project to represent the state of Connecticut. Her colleague inventor, Elijah Simmons, invented the Squirrel Spinner. The convention will be held between May 31 and June 3.

“I feel mixed emotions,” she said. “I feel happy and a little scared because I do not know if my invention is going to win. I feel happy and excited for the most part because it is an awesome opportunity for me.”

Due to her concerns about electric baseboard heaters and their close proximity to furniture and the potential of a fire hazard, Dell’Aera’s universal furniture protector was created to prevent household fires. According to her project research, she feels thousands could be interested in purchasing such a project in order to protect their homes.

With her father helping purchase supplies, Dell’Aera created an aluminum sloped fixture which braces against a wall and also prevents an object from being pushed too far back against the heater at the wall’s base.

The Dell’Aera family said they are going to apply to the Shark Tank television show to see if Emerson can garner investors for her product.

Currently, the young inventor said she would like to consider more inventions in the future but will focus on her universal furniture protector for now.

“I think that it saves lives, it saves homes and it saves families,” said Emerson. “It is also an inexpensive fix to save priceless items.  That is the reason I think that one of the sharks would want to invest in my invention.”

The Invention Convention Worldwide organization seeks to promote the education of students between kindergarten and twelfth grade on how to identify and solve problems along with the value of entrepreneurship, creativity and confidence building. Convening with leaders in business and education, Invention Convention Worldwide connects many through a global community in the form of competition and informative events surrounding its mission.