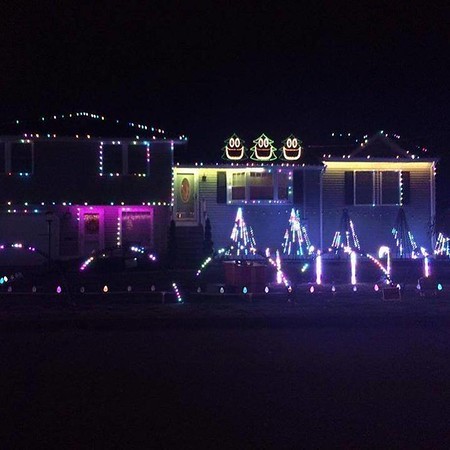 Brian Johnson Staff The home at 111 Rosewood Dr. in Bristol lit up as "Lights on Rosewood" for the Christmas season. Buy this photo
Published on Wednesday, 22 December 2021 16:53
Written by BRIAN M. JOHNSON

BRISTOL ‚Äì A local family‚Äôs Christmas decorations have been named the winner in a national contest, for which they will be getting a free trip to Hawaii.

Rob and Lori Osenknowski, who live at 111 Rosewood Drive, have been entertaining the community with their holiday light show, ‚ÄúLights on Rosewood,‚Äù for years and use the show to collect donations for good causes in the community.

This year, on a dare from their neighbor, Lynn Gaski, they decided to enter into a national Christmas lights contest held by Live with Kelly and Ryan.

They found out they were among the top six finalists on Dec. 1, with Lori Osenkowski excited at the prospects of going on the first big vacation since their honeymoon 13 years ago. On Wednesday, they learned they won.

‚ÄúIt was totally unexpected,‚Äù Lori Osenkowski said. ‚ÄúWe were screaming and jumping up and down. We got so many messages and so many phone calls we couldn‚Äôt keep up with them. It‚Äôs really overwhelming.‚Äù

As the days drew closer until the big reveal, Rob and Lori Osenknowski weren‚Äôt necessarily expecting to win. Their victory came as a welcome surprise.

The couple plans to pay Gaski a visit to thank her for encouraging them to join the contest soon.

Rob and Lori Osenkowski will be able to enjoy a seven day, six night trip to the Hyatt Regency Maui Resort and Spa. The trip will include airfare, a $200 daily food and beverage credit and a luau for two. This vacation would ordinarily be valued at $8,500.

Lori Osenkowski added she is looking forward to the palm trees and pineapples.

The community had been cheering for Rob and Lori Osenkowski to win since they posted about entering the contest on Bristol Talks. More than 1,000 people liked and commented to wish them well. The contest, she explained, was not just decided by judges; Bristol residents supported them by voting for their home.

‚ÄúWe would have never gotten the votes without the support of the community,‚Äù Lori Osenknowski said. ‚ÄúBristol rolled up their sleeves and got it done. The connection that our community has shown to people they don‚Äôt even know is amazing to see. It‚Äôs almost like a Christmas spirit that lasts all year long.‚Äù

Lights on Rosewood got its start in 2012, when Rob Osenkowski watched a video about animated strobe lighting. Christmas, he said, had always been important to him and his wife growing up. Today, the show features 15,000 lights with 45,000 channels. Every light bulb has three lights, which can make any combination of colors. The show can also be synchronized to go with music.

Since its inception, Lights on Rosewood has raised $55,000. The Osenkowski family has collected canned food for Brian's Angels and donations for the Police Department and Bristol Schools in past years. They also collected money for five local families in need.

This year, in addition to collecting food for Brian‚Äôs Angels, Lights on Rosewood is collecting donations to support Carrie Barganier, a respiratory therapist Bristol Hospital with three young children whose husband Nate died on June 4 ‚Äúfollowing a sudden cardiac event.‚Äù

‚ÄúThey are such a sweet family and when we heard about what happened in the summer we wanted to help,‚Äù Lori Osenkowski said. ‚ÄúWe told Carrie what we wanted to do and told her that she didn‚Äôt need to feel obligated. She accepted and 100% of proceeds that we collect will go to support her and her family.‚Äù

So far, the Rob and Lori Osenkowski have raised $10,350 for the Barganier family with the help of community donors and contributions from Liberty Baptist Church. They have also collected 16 boxes of food for Brian‚Äôs Angels thus far this year.

People can view the ‚ÄúLights on Rosewood‚Äù as a static show Monday through Wednesday with no music. Then, on Thursday through Sunday from 5 to 9 p.m., observers can get the full experience with a 20-minute show synched up to six Christmas songs. The display will continue through Christmas.