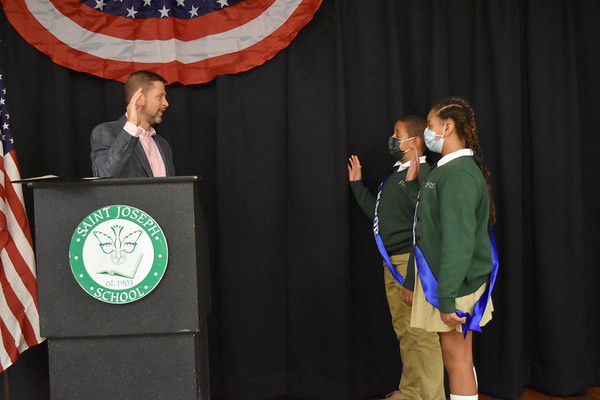 BRISTOL – Two St. Joseph School students were named mayor for a day Thursday as part of efforts to raise funds for the school and to encourage interest in local government in youth.

Bristol Mayor Jeff Caggiano visited with Charlie and Whitney Elder, a third and fourth grade respective brother and sister duo, who were both made mayor for the day. The students were able to engage in mock local government activities with Caggiano.

“We had a setup back with Mayor Ellen (Zoppo-Sassu) and she helped with us planning the event. When Mayor Jeff won the election he was ecstatic to go ahead with it. Both mayors have been instrumental in making this work and it’s been amazing to have their support,” said St. Joseph Home and School Association President Nicole Wilson.

Wilson said that as part of fundraising efforts to support school activities and keeping tuition low, families were able to bid as part of an annual auction for students to serve as mayor for the day.

A mock inauguration ceremony was held with the two Elder siblings before they took part in a ribbon-cutting ceremony, which made St. Joseph School a mock City Hall. Afterward a few words were shared with Caggiano as he explained what a mayor did to gathered students.

Both Charlie and Whitney also held a daily briefing in the library on the day’s activities. Afterwards, the pair gave three decrees for all students at the school where they would have no homework for the day, receive an extra recess and have a day of “free dress” the following day.

Whitney and Charlie toured classrooms to share the news of the decrees before going home.

“I like the idea of making good choices for our school,” said Charlie. “I think I’ll be able to help people.”

“I think that helping the school is a good idea,” said Whitney.

Caggiano answered questions of students in an assembly before parting to follow Charlie and Whitney in their activities.

“These things are just awesome and it’s as fun as can be to get the next generation of potential leaders involved and paying attention to what happens in local politics,” said Caggiano. “One of my big campaign themes was all politics is local. We don’t have people paying attention to local politics for the most part. Around 35 percent of registered voters came out to vote for mayor where we have 80 and 90 percent for the presidential.”

He continued by saying it’s important to foster an interest in youth regarding how government works so as children grow they can make thought out decisions.