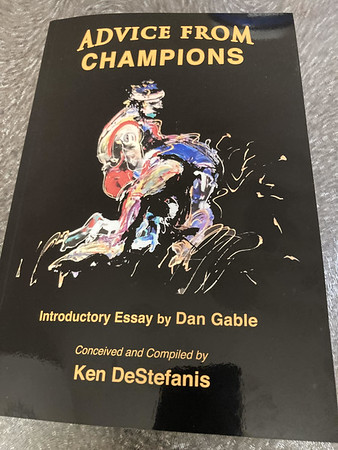 Here‚Äôs a photo of the book cover by Ken DeStepanis, in which one segment is written by former Bristol Central wrestling coach Dennis Siegmann, who went on to college championship teams and then back to high school contingents more recently in Florida. The following sentence begins Siegmann‚Äôs initial entries shown in the wrestling informative, headlined as ‚ÄúSetting Goals - Success v.s. Winning.‚Äù

‚ÄúI like to talk to each of my high school wrestlers about their individual goals for the season. Since I have had wrestlers at all levels on my teams, I usually wait until just prior to the first match to discuss goals. It is important to me to distinguish between a discussion on wrestling and one about individual success.¬Ý

‚ÄúEvery kid wants to be a winner, a state champ, but we as coaches all know that isn‚Äôt possible for every kid in our program. To me, it is important to have goals that are achievable but a goal that requires hard work to get there.‚Äù

Lovey Pitaro sent me a note for me to remind folks about the Holly Day Boutique to be held on Saturday, Ded. 4, 2021, at the New England Carousel Museum between 10:00 a.m. and¬Ý 3:00 p.m. There will be decorated wreaths and swags, ornaments and other Christmas items for sale, those made by members of the Bristol Garden Club

Elaine, one of Bristol‚Äôs most enjoyed singing performers from the past, will celebrate her 90th birthday this Saturday. If you don‚Äôt know this lovely lady, then you are unfamiliar with some of Bristol‚Äôs best-ever musical productions.

This past column had my comments on growing up in Bristol during the 50‚Äôs and 60‚Äôs, and among those contacting me about the write-up was Sally (Johnson) Shea, now reading in Florida with husband, Doug. You recall them as owners of Shea Chevrolet in Terryville.

Anyway, Sally and her late brother, Tom, grew up on New Street in Forestville, one street over from where my late brother, Bill, and I first grew up on Sixth Street. Bill and Tom were good friends and later Bristol Eastern classmates together. As I recall, Sally and Tom‚Äôs cousin, Gail Faucett, lived next door to them..

Hank Lodge was among those who was inducted into the Bristol Sports Hall of Fame this past Friday at the DoubleTree. But, he wasn‚Äôt the only family member celebrating and that was for another reason. Hank had purchased flowers for his wife, Joan, who was in attendance, because Friday was also their 55th wedding anniversary.