BRISTOL BITS: Some committees are better than others, including this one 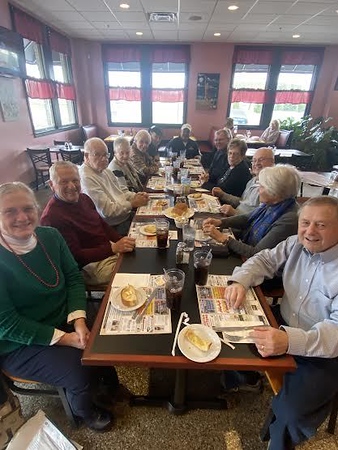 For those who served on committees have found some a little better than others. I‚Äôve had that opportunity and this includes the latest in which I was involved with, the General Edward Wozenski Monument Committee. This group of friends, as I feel about them, was one of those with special camaraderie.

We met on Wednesday at Max Pizza lV to enjoy one another‚Äôs company one last time as a unit. Our friendship will continue as some of us overlap into other endeavors. Those shown in the photo here, besides myself, are:

If there were a contest for a Mr. and Mrs. Bristol, here are some folks who would be good candidates: Bob and Patti Kalat, Bob and Pam Messier, Bill and Fran Greger, Marty and Jackie Hurwitz, Judy and Tony Lodovico and, Tom and Joyce Maghini, among many more.

Among the many friends we have lost recently are Inez Louise Melluzzo, Maureen Ghio, Joel B. Wolff and Daniel Slevinsky.

Daniel, for example, was a good man. He was a former police chief of Plymouth and had many friends here in Bristol. I always enjoyed when he would call me at the Bristol Press to chat

Not only is Hank Lodge co-chair of tonight‚Äôs Bristol Sports Hall of Fame induction program evening, he‚Äôs also going to be enshrined. Hank is an annual MVP candidate among its committee members/directors annually.

Hank‚Äôs wife, Joan, by the way, gets the Lodge family MVP annually in being the good wife that she is.

Where would Bristol be without the Memorial Military Museum of Bristol?

This organization only helps top off the fact that we could possibly be the strong veterans town in the state. Could you even imagine the benefit Bristol has received since the late Jack Denehy came up with the idea. Look at us now!!!!

I‚Äôve talked about this before for entertainment purposes. If we had such an institution, I would place Ebenezer Barnes, Bristol‚Äôs first home-settler, in the inaugural class. The Barnes family has remained here since and that goes back to the 1720‚Äôs with Tom Barnes now the family patriarch.