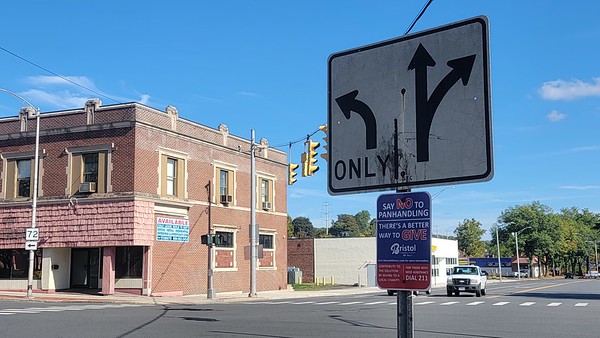 Dean Wright | Staff "Say No to Panhandling" signs have been placed about Bristol. Buy this photo
Published on Friday, 22 October 2021 16:20
Written by Dean Wright

As panhandling concerns continue to be a topic for officials and residents alike, Bristol for one is taking steps to curb the activity.

Bristol City Hall has placed “Say NO to Panhandling, there’s a better way to give” signs at strategic places throughout the city as a means of encouraging residents and visitors to give to nonprofit organizations focused on helping those in need as opposed to handing money out to those who ask.

The signs encourage others to visit the Bristol All Heart webpage for information about agencies and nonprofits supporting individuals in need or to dial 211 for similar information.

Many on various social media pages claim they often see panhandlers change clothes in a parking lot or organize shifts for money gathering activities. Individuals asking for money can be picked up by police should they not leave private property when asked or if aggression is shown in the course of asking for money.

“The organizations that work with people in need are typically nonprofits so they do their very best to provide staples like food, clothing and other basic needs and help pave the way for people to have access to phones and computers. Those organizations often rely on donations in order to pave the way for people to go ahead and have a hand up,” said St. Vincent DePaul Mission of Bristol Executive Director Christine Thebarge. “As far as panhandling goes, if a person hands $5 to panhandlers, that’s five dollars for whatever they will spend it on. It can also go to providing several meals to several people who are in need. It comes down to an individual’s choice. However, the most good comes from being able to give it to organizations that can maximize the benefit of the dollar.”

One individual utilizing the services of the mission and a former panhandler voiced a different view.

“I don’t like the idea of (the signs),” Jim Emonds said. “It puts homeless people in the same category. We’re trying to get built up here (at St. Vincent DePaul Mission) and getting vouchers for apartments and all that, so we’re getting built up. But that tears some of the pieces down because (some people) are looking at us like we’re panhandling every day or something.”

He said he felt at times people might look at someone as just a panhandler looking for money and not as someone who needs help to better their lives.

“They don’t say they’re homeless people that need help. They say ‘look at them, what they're doing out there?’ Instead of helping the people out there, to stop panhandling in the city, help the people that are panhandling,” he said.

In his opinion, those who want to help should consider giving to panhandlers as well as nonprofit organizations seeking to help individuals struggling with homelessness.

Emonds shared he had panhandled previously in West Hartford and other areas for a year before coming to the Mission. He had spent some time in a jail for an unsaid circumstance before taking steps to improve his life.

When panhandling, Emonds said he had sought around $25 a day as a limit to provide for his needs, but he had known others who had sought hundreds of dollars to potentially spend on illicit substances.

“I don’t know if it’s kind of a catch-22,” said Emonds about the stigma surrounding homelessness and panhandling. “You got two aspects. Some people are panhandling for the day to survive or whatever.”

He said individuals who panhandle do so for a variety of reasons and not all of them were always clear. Sometimes homeless individuals may not be able to obtain offered services because of individual circumstances.

According to Bristol Mayor Ellen Zoppo-Sassu, the placing of the signs started as an idea brought forward by a community services police officer who saw signs that encouraged giving to nonprofit aid organizations and discouraged giving to panhandlers while he was on vacation.

“We (put up signs) as a response to people calling the police department and us at the mayor’s office and others complaining about it because they think it’s a bad look for Bristol, even though it’s not just a Bristol issue. It’s all over,” Zoppo-Sassu said. “But, even more importantly, people were saying how can we help, but we don’t want to give money because we don’t know if they’re buying drugs or alcohol, which unfortunately does happen with the panhandling group.”

The mayor said she noted the city sends and requests social workers from different outreach efforts and agencies to visit with individuals who are panhandling or homeless to get them services and housing.

“We decided to try it to see if it works because it gives people a little bit of direction,” said the mayor.

Organizations the city encourages residents to donate to or contact include St. Vincent DePaul Mission of Bristol, The Agape House, Brian’s Angels, Meals for Neighbors and the local Salvation Army chapter.

In New Britain, while there are no initiatives that address panhandling specifically, according to the mayor’s office, earlier this year Mayor Erin Stewart launched New Britain Recovers, a social services initiative aimed at helping those experiencing homelessness and/or are struggling with addiction.

According to a city document on the Bristol All Heart website discussing panhandling, “The first rule is to not give money. Individuals who are on the streets asking for money every day are not bad people – most are folks with incredible challenges who need help. Recent studies have shown people with mental illness and physical disabilities engage in the highest percentage of panhandling. Start from a place of compassion when thinking about or interacting with those on the streets.”