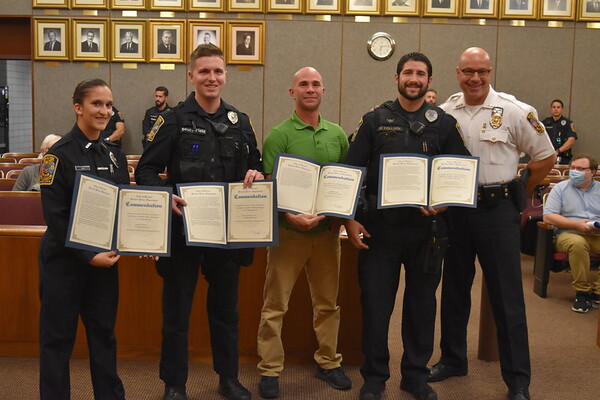 BRISTOL – During the regular meeting of the Bristol Police Commission Tuesday night, five officers and one citizen were recognized for their actions in service to the community.

“I’d like to first call up Sgt. Craig Duquette,” Bristol Police Chief Brian Gould said at the meeting. “Officer Pollock responded to a shooting in the area of 13 Jerome Ave. He was able to quickly develop a suspect who had shot the victim. Through his investigation he was able to secure an arrest warrant for a suspect for criminal attempt to assault first, criminal possession of a firearm and illegal possession of a weapon in a motor vehicle.”

Gould said the suspect learned of the warrant and took actions to flee the state. The suspect’s vehicle was located at a hotel in New Britain with New Britain police assistance. Surveillance was set up at the hotel and detectives were able to observe the suspect exit the hotel and proceed to the vehicle in question. Duquette and another officer took the suspect into custody without incident.

Duquette was awarded the Silver Star for his actions in the team operation. Other officers in the operation were honored at a previous commission meeting.

“Based on the performance and diligence of Officer Pollock, Officer Deluca, Sgt. Duquette, Det. Mandela and Det. Ward, it allowed a felon to be apprehended who was a detriment to public safety,” Gould said.

“On June 5, 2021, officers were investigating a motor vehicle accident that occurred in the woods on the New Britain Water Company property,” Gould said. “The victim who had crashed his dirt bike was located by Christopher Lebel who was walking in the woods. Christopher noticed the victim was unconscious and ran home to get help and took his ATV in an attempt to rescue the victim.”

While riding on his ATV, Lebel ran into Officer Harrison Pollock and Officer Teague Soucy-Field and escorted them to the location of the victim. He then allowed officers to use his ATV to extricate the victim.

“If it was not for Christopher’s willingness to act and assist officers, the victim would have been in the woods longer, making the victim’s prognosis worse,” Gould said. “Christopher went above and beyond in assisting in this incident.”

Lebel was presented with the Citizens Commendation Award.

In the same incident involving Lebel, Officer Samantha Kiss was the first to report to a call at the time of an individual who crashed a dirt bike in an unknown location on the property. She began checking the wood trails in an attempt to find the victim. Kiss called out for the victim and soon located the victim and began directing resources to the location. At the same time, Pollock and Soucy-Field entered the property from another entrance and encountered Lebel. Pollock rode on the back of the ATV with the necessary medical equipment and Soucy-Field ran beside. Once reached, the victim was secured to the ATV and later transported to St. Francis Hospital for treatment.

“Based on the actions of the officers involved, they displayed performance above their normal course of duty,” said the chief.

Soucy-Field, Pollock and Kiss were awarded the Letter of Commendation and all named Officer of the Month.