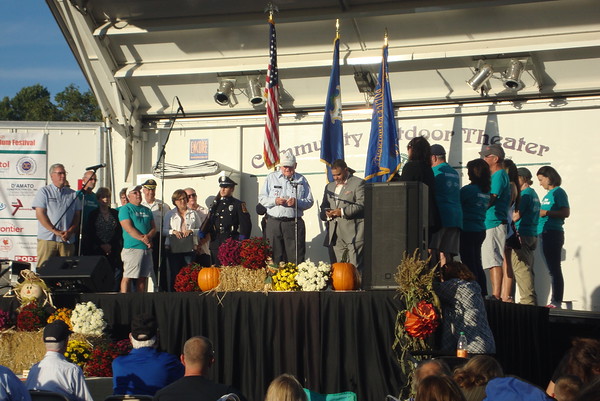 BRISTOL – The 2021 Mum Fest is a go for the 59th time after having been canceled last year due to covid-19.

As part of the opening ceremonies Friday, the Bristol Korean Veterans accepted the Hometown Hero Award, which is given for an act of bravery, with a nomination from the community. Korea War Veteran, Richard Avery received proclamations.

“They didn’t speak my language; I didn’t speak their language, but we knew we were there for the same reason,” said Avery.

This was a first-time event for Gail Negron.

“My granddaughter is trying out for Little Miss Mum. [She is] Kendall Seobile,” said Negron.

Mum Fest Vendor Chair, Andy Adams said that there will be about 90 vendors present at the weekend-long event, including craft vendors, artisans, businesses, and non-profits.

“Tomorrow [Saturday] will be a big day for us because vendors will start coming on the street at 7a.m.,” said Adams. “A lot of returning ones, and a couple of new ones that heard about us from other vendors.”

Adams said that aside from the food trucks, attendees can also feel free to dine at Bristol’s restaurants because they were made aware of the festival, and are prepared for any rush.

“We wanted to spread the wealth,” said Adams.

Attendees who have come in the past may notice some changes to this year’s festival.

“The hours are reduced, from four days to three, and the pageant is on site this year,” said Maria Salice, Entertainment Chair.