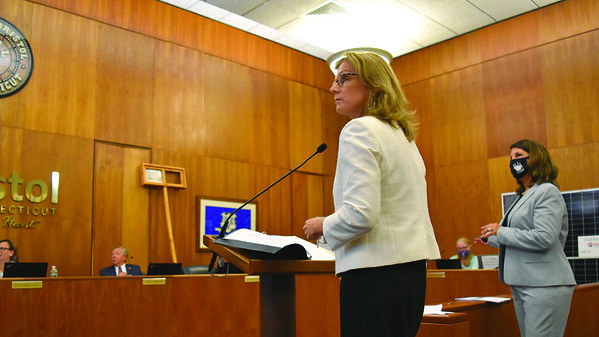 BRISTOL – Bristol Public Schools central executives presented a plan to the City Council for the reimagining of the district in 2023. The plan seeks to rebrand and redistrict in order to create class size and demographic consistency across the educational system.

The reimagining of the district seeks to accomplish four goals, the first being to renovate old and outdated school facilities. The system wants to redistrict in order to create “parity in class size and demographics,” said presentational materials. Administrators want to create consistent grade configurations and instructional models throughout the school system and increase access to prekindergarten programming.

The district surveyed feedback from members of the public and staff over the course of spring and summer of 2021 through the use of software called ThoughtExchange. Around 1,020 individuals responded to surveys with 1,058 “thoughts” and over 27,500 ratings. The system allows for comments and ratings of those comments to allow administrators to tally and explore the feelings of those engaging with the survey.

Out of these discussions, four potential options for the redistricting of the district were refined into a fifth option which has become the recommended plan of action by the BPS Board of Education as of June.

“This plan better serves students and offers revenue opportunities at the pre-k level,” said Carbone. “It solves the problem of outgrowing space dedicated to our pre-k students at (Bristol Early Childhood Center). It addresses inconsistent enrollment patterns in outdated buildings. The plan offers an equitable learning environment for all of our BPS scholars with aligned grade configurations throughout the district.”

The fifth option will see the closure of Edgewood Elementary School to then be repurposed into a prekindergarten academy. The Bristol Early Childhood Center students would be relocated to the new prekindergarten academy along with other prekindergarten sites throughout the district. The district will reconfigure “grade bands” in schools, said Carbone, to kindergarten through fifth grade, sixth through eighth and ninth through twelfth. Within the model, there would be two large middle schools with Chippens Middle School being one and Northeast Middle School the other.

The district seeks to build a larger Northeast Middle School and will redistrict to align with that and planned “high school feeder patterns,” said Carbone. Some renovations will be done at West Bristol School and Greene-Hills School. Moderate renovations will be done at Edgewood to accommodate younger students and redistricting will be enacted in two phases to work in tandem with building projects.

In the phase one model, Edgewood will become a prekindergarten-only facility. The Bristol Arts and Innovation School will house students between sixth and twelfth grade in a lottery style acceptance method. Students from kindergarten through fifth grade Ivy Drive and Mountain View Schools will filter through Northeast Middle School as they pass their respective grade levels and then into Bristol Eastern High School over the course of phase one. Kindergarten through fifth grade students with South Side School, Hubbell School and Stafford School will filter through Chippens Hill Middle School and then onto Bristol Central High School. Kindergarten through eighth grade students with Greene-Hills School and West Bristol will also move onto Bristol Central High School.

Timelines are still being discussed as projects move forward.

School officials said that with all renovations and build estimates added, the project should cost an estimated total $110 million with no increased operational cost and a city bonded cost of around $38.5 million.