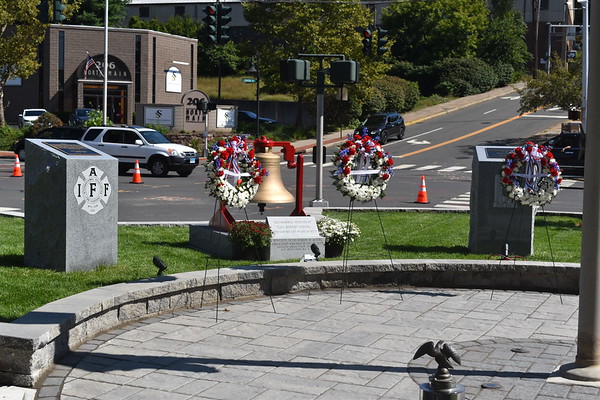 Dean Wright | Staff Wreaths rest near a memorial honoring the sacrifices of firefighters outside the Bristol Fire Department Headquarters. Buy this photo

Dignitaries, first responders and residents gathered outside the North Main Street Bristol Fire Department to remember the lives of both heroes and victims who died 20 years ago in the Sept. 11 terrorist attacks upon the World Trade Center in New York City.

Area first responders lined up behind the fire station before marching eastbound on Center Street towards its intersection with North Main Street, where a memorial was installed. There they stood quietly to listen to those slated to speak.

The memorial lists the names of Bristol Fire Captain Robert Young and Bristol Firefighter Edward Conlon who died May 17, 1971 and June 9, 1935 respectively. Both passed in the line of duty while serving Bristol residents.

The Pledge of Allegiance was led by Bristol Firefighter Anthony Quarto. Those who placed wreaths in front of the memorial included retired Bristol Fire Captain Francis Murphy and Michael Petosa representing the Greater Bristol Labor Council and area citizens. Bristol Firefighter James Marks also placed a wreath. Marks was noted to have planned the ceremony, said city officials. Bristol Firefighter Chuck Judd tolled a bell to represent those who had not returned to station. Visitors were asked to join event leadership in a moment of silence.

“Acts of patriotism and heroism come in many different ways,” said Bristol Fire Lt. Sean Lennon, president of Bristol Firefighters International Association of Firefighters Local 773. “(Those terms) get thrown around loosely, however, we’re going to decide what those mean today.”

Lennon said that Captain Patrick “Paddy” Brown of Ladder Three with the New York Fire Department was an example of heroism. Ladder Company Three has historically been noted for suffering some of the heaviest firefighter casualties of the attacks.

“Everyone who’s here in a blue uniform knows one of the major no-no’s in the service is to defy an order,” said Lennon. “No truer act of heroism happened that morning. Captain Paddy Brown defied an order. He was on the 44th floor of the first tower. The chiefs were evacuating the building. Captain Brown defied an order and said ‘I have too many burned people here with me, and I’m not leaving them.’ I think that sums it up.”

“These solemn ceremonies of Sept. 11 will always be more than a remembrance of the past, more than a tribute to the lives lost 20 years ago,” said Martin. “These ceremonies are today and always will be a remembrance and tribute to both the living and the dead. The image of that day will never leave us but what also stands out is what we discovered about ourselves.”

He said it was a time where Americans rose above their fear and risked their own lives to save others. He welcomed visitors to the memorial dedication and said it was an inspiration for local firefighters who joined Local 773.

“On the morning of 9/11, 20 years ago, it was a day much like this, a Tuesday with blue skies,” she said. “Earlier that morning, 246 people had boarded an airplane headed for a destination they never reached. Two thousand six hundred and six people woke up and got ready to go to work and never returned home.”

“Eight paramedics showed up for work prepared to save lives that day and the lives that were lost were theirs. Sixty police officers clocked in and never clocked out and 343 firefighters answered the call of duty and never returned to their stations,” she continued.

The mayor said that more than three times the size of the Bristol Fire Department was the loss suffered by the FDNY. She noted that many thought Sept. 11 was a fork in the road for government policy.

“I also like to remember what happened on Sept. 12 when the flags were flying. People looked at each other as neighbors and friends...,” said Zoppo-Sassu. “...I like to think that which divides us often unites us and I hope today we can think of those messages and think of these monuments as living testimonials as an outdoor museum to the memories we’ve had over the last 20 years and the sacrifices that have been made.”