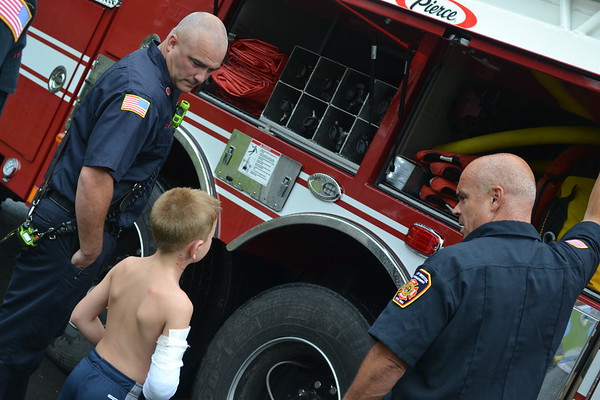 BRISTOL -- One of two young boys burned during a backyard fire accident over the weekend has been released from the hospital, receiving a special drive-by Thursday from local police and firefighters who wanted to wish him a speedy recovery and show him how much support he has from those in the city.

The father of the 7-year-old child, who wished to remain anonymous, said he was very grateful to city officials for what they did for his son, adding that everyone’s thoughts and prayers are with the younger child who is still recovering from his burn injuries in the hospital.

“We’re not out of the woods yet,” the father of the older boy said. “They both have a long road ahead of them. We’re not going to be OK until the other boy is home.”

“We’re still praying and giving his family all the love we can,” he continued.

According to police, the two boys, ages 7 and 5, were at a backyard fire outside a home on Pine Court on Sunday when they each suffered burns following an accelerant being used in the flames. Both of them were taken to area hospitals before being transferred to special burn units.

The status of the 5-year-old remains unclear.

“All I know is that he’s still in Boston,” Mayor Ellen Zoppo-Sassu said Thursday, as the child was taken to a burn unit there.

“We are continuing to think good thoughts for the 5-year-old, who suffered more serious injuries,” the mayor continued.

The father of the 7-year-old said his son suffered second- and third-degree burns to his arm, face and some of his chest. According to the father, the two children are best of friends.

“These two are inseparable,” the father said.

For the 7-year-old, who is transitioning back home after being hospitalized, seeing police and firefighters drive down his street with their lights and sirens activated brought a smile to the young boy’s face.

“We appreciate everything the Bristol Police Department and Fire Department did for us,” the child’s father said.

“It definitely raised his spirits,” the father continued. “What this kid endured -- he’s been through a lot.”

Zoppo-Sassu said both police and firefighters jumped at the chance to sort of reprise the birthday drive-by events that were done earlier in the pandemic. They each said yes “the minute I called,” Zoppo-Sassu said.

“I thought it was a nice thing to do for someone who has been injured and traumatized,” the mayor said.

The young child, who had bandages around most of his right arm, got the chance Thursday to sit in the driver seat of a police SUV and see all the nooks and crannies on one of the city’s ladder trucks, learning about all the equipment firefighters have aboard the truck and what it is used for. He also received firefighter hats from the fire department and goodie bags from both police and the Parks Department.

Dep. fire Chief David Butkus said the idea for the drive-by stemmed from city officials learning the young child had an interest in public safety.

“We love to help people out,” the deputy chief said. “Obviously this boy is very strong. He’s got a great attitude.”

“We thought we could help him out and lift his spirits,” Butkus continued.

The child’s father said police and firefighters did just that.

“It definitely raised his spirits,” the father said.

Zoppo-Sassu, who was present for the drive-by, said it was nice seeing a smile on the boy’s face, especially considering how much he has gone through.

“He seemed like he’s in good spirits,” the mayor said.