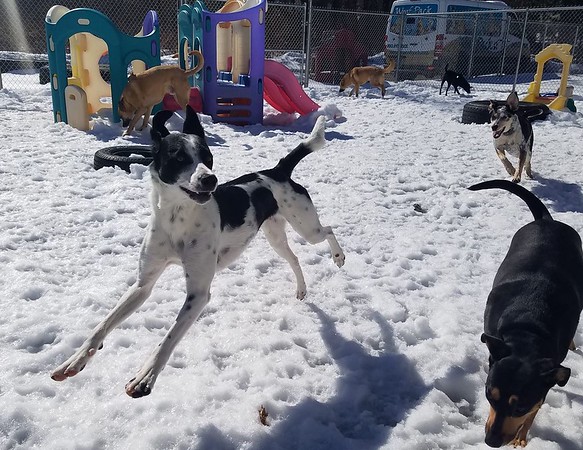 BRISTOL -- With the past year being a challenge for many businesses, Woof Pack continues putting its best paw forward with plans for expansion in the future.

“We board overnight and long term. We do grooming and training,” said Woof Pack Owner Bob Carbonell. “We do everything as complimentary services to our daycare. If someone drops their dog off and they want their dog’s hair or nails done, we do that here so they don’t have to go someplace else.”

Carbonell said that animals visiting Woof Pack at 30 Cross St. are able to play in an open environment in a fenced playground. The business has four different trainers and they focus on obedience and even agility for competitive dog sports.

“It’s not all tedious. There’s a lot of fun stuff,” said Carbonell. “The dogs benefit from it but people benefit from it even more. If we could train people, our job would be so much easier.”

He noted the business even had a pet taxi service to help owners with travel if necessary.

Carbonell said that he and colleagues had animals but weren’t happy with the dog service options available in the area and that motivated them to create a multiple service business in 2017.

“We thought it would be great to have one-stop shopping,” he said. “What sets us apart is that we’re staffed 24/7. We have people here with the animals.

“Foot traffic fell off a cliff (early last year),” said Carbonell. “We struggled. If you’re working at home and your kids are at home and can be there with your dog, why spend your money? We understand what happened and why. Activity levels have started picking up again.”

Carbonell noted after a tough year and doing everything it could to shrink costs, Woof Pack persevered.

“We made the commitment in the beginning to stay open for first responders and emergency personnel as well as the health community,” said Carbonell, a veteran himself. “They needed us.”

The Woof Pack owner said that the business had started seeing an uptick in dog numbers towards the beginning of the summer.

“What’s different now is we’re in growth mode,” said Carbonell. ”When we first proposed to City Hall we had a five-year plan we showed them. We wanted to open five different locations around central Connecticut and expand into veterinary services and open a training center for dogs separate from everything else.”

The owner noted that with the pandemic’s challenges, it slowed plans, but Woof Pack is once again looking to add to its pack of services, clients and plans.