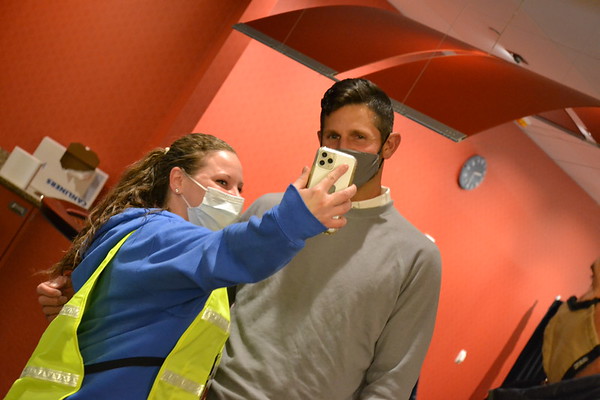 BRISTOL -- Former UConn and NFL quarterback Daniel Orlovsky received his first dose of the covid-19 vaccine in Bristol on Thursday -- something local officials are using to target a younger demographic who may be hesitant to get their shot.

The 37-year-old, who now works as an analyst for ESPN after more than 10 years in the NFL, received the Pfizer version of the vaccine on the same day ESPN and its partners helped vaccinate about 250 area high school students.

“I think with Dan coming in and getting his shot, it just shows that the vaccine is safe,” said Albert Peguero, manager of emergency preparedness at Bristol Health. “If there was any hesitancy, hopefully this will address that.”

Bristol Health has partnered with the Bristol-Burlington Health District to create the mass vaccination site at ESPN -- where staff and volunteers from these groups as well as the Medical Reserve Corps help run the clinic. In nine operational days, the site has administered about 4,500 doses of the vaccine.

“It was kind of a no-brainer, really,” Orlovsky said of publicly receiving the vaccine.

Not only was he able to get vaccinated, but he was able to do it at ESPN, where would be for analyst responsibilities anyway, and help influence the younger generation, particularly those interested in sports, to get vaccinated as well.

“It was honestly convenient for me,” Orlovsky said after receiving the first of two Pfizer shots. “I was able to kill two birds with one stone.”

After receiving his shot, the 145th pick in the 2005 NFL draft used the 15 minutes he needed to be observed for a possible reaction to the vaccine to connect to some local high school football players.

“For me it was really cool because I was those kids a few years ago,” he told The Bristol Press.

While speaking to students of both Bristol Central and Bristol Eastern high schools, Orlovsky candidly told them he originally had no intention of attending UConn. Despite receiving offers to play for bigger programs, the ESPN analyst said, UConn football coach Randy Edsall stayed on him and was the only one in the recruiting process who was completely straightforward with him.

“One of the best decisions I ever made was to go there,” Orlovsky told the students. “I went to school to play football. People don’t like when I say that, but it’s the truth. I didn’t have a plan B.”

Victor Rosa, quarterback at Bristol Central High School, said getting to meet the former UConn quarterback was all the more special for him because Rosa’s first college offer to play football has come from the University of Connecticut.

“When I heard he’s going to be here, I said ‘he’s a UConn alumni,’” Rosa said. “I thought it’d be great to ask him a few questions.”

Orlovsky on Thursday also took a few minutes to thank the staff and volunteers at the vaccination clinic during what is celebrated as National Volunteer Week.

Those generous and brave enough to donate their time and risk their own safety to vaccinate others are the ones helping in getting back some normalcy, he added.