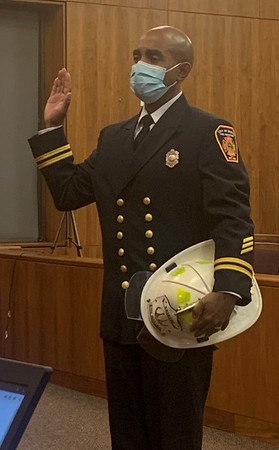 Submitted by the Mayor’s Office Kristopher Lambert is receives the oath of office as Bristol’s new fire marshal. Buy this photo

Submitted by the Mayor’s Office From left are: Mayor Ellen Zoppo-Sassu, new Fire Inspector Gary Buzzell, new Fire Marshal Kristopher Lambert, and City Councilwoman Brittany Barney, who is the council’s liaison to the city’s fire commission. Buzzell and Lambert were sworn in to their new roles at the council’s February meeting. Buy this photo 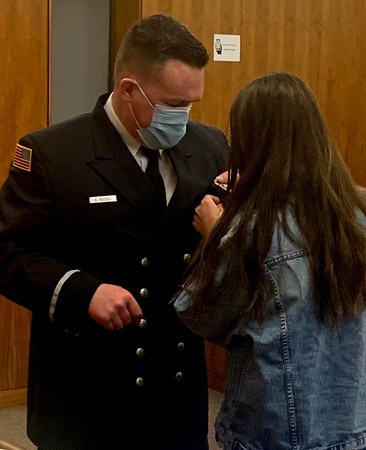 Submitted by the Mayor’s Office Gary Buzzell’s new badge as fire inspector is pinned to his uniform by his daughter Elena. Buy this photo

Zoppo-Sassu first gave the oath of office to Gary Buzzell as a new fire inspector in the fire marshal’s office. His daughter Elena then pinned his new badge to his uniform.

She then gave the oath of office to Kristopher Lambert as the new fire marshal. His sons Brice and Brendan removed their father’s old badge and pinned the new one to his uniform.

Lambert replaced Robert Grimaldi, who retired from the job in 2019 and went on to join the West Hartford Fire Department as deputy fire marshal.

Both Lambert and Buzzell “have gone through an intensive and rigorous class and testing process over almost the last year, thanks to the delays associated with the pandemic,” Zoppo-Sassu said.

“These are two extremely critical positions for the Bristol Fire Department,” she said, thanking department members who came out to support their colleagues in their new roles.

Zoppo-Sassu said that both served admirably on the line for the Bristol Fire Department.

“We have high expectations for the enthusiasm and commitment that they’re now going to bring to the office of the fire marshal,” said Zoppo-Sassu.

The fire marshal’s office conducts investigations into fires as well as related issues.