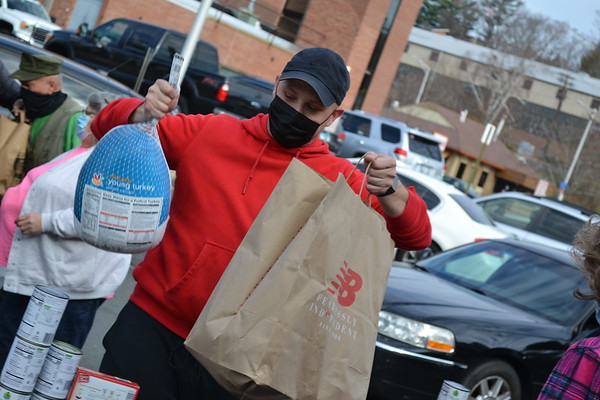 Justin Muszynski | Staff Hundreds of turkeys were collected for each of Bristol's food pantries outside the Bristol Post Office on North Main Street. Buy this photo

BRISTOL -- Cars were lined up on Saturday at the local Post Office to provide Thanksgiving donations to those who need it most.

“We give to all six food banks in Bristol,” said Pete Rutovich, a Bristol letter carrier who has been doing a food drive for the past 11 years.

The donations would normally be able to be left by residents’ mailboxes, but this year a drop-off was organized outside the Post Office because of the covid-19 pandemic. As of about noon, 3,500 pounds of food, including 190 turkeys, had already been collected.

“It’s been absolutely awesome,” Rutovich said, adding that he wants to thank the Post Office and the union for allowing the drive, the letter carriers who help, “but most of all the residents of Bristol for the phenomenal support.”

Rutovich, along with his son and wife and other volunteers, spent Saturday collecting loads of food from generous individuals who piled into the North Main Street parking lot.

“Each year it’s just gotten better and better,” he said. “I learned how to contact people and get the word out.”

Rutovich said he gets a ton of help from the community to make the drive possible each year, including from the Stop & Shop on Farmington Avenue, which normally makes flyers about the event available to its customers. This year, they were handed out to customers as they entered the store.

“That’s the manager at Stop & Shop,” Rutovich said. “They’re very good to us.”

Rutovich’s son, Todd, who helps out each year, called it a “great thing” that his 73-year-old father does. He added that he doesn’t do it for accolades or any other reason than to help out when food pantries need support most.

“He’s been doing it 11 years out of the goodness of his heart,” Todd Rutovich said.