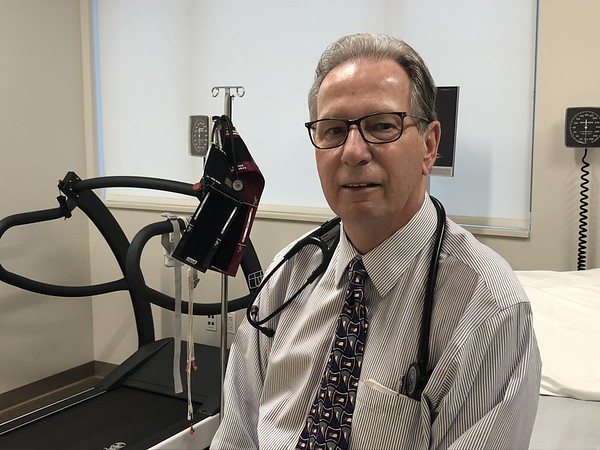 BRISTOL – Dr. Michael L. Whaley is retiring from his cardiology practice at Bristol Health at the end of the month.

“I just turned 70 years of age and I think 34 years and five months is enough,” he said. “My last official day is Nov. 30. I just to say thank you to the people of Bristol who have been wonderful to me over all these years.”

A Rocky Hill resident, Whaley said he grew up in Bridgeport and when he was 18 he started working at hospitals in respiratory care.

After earning a bachelor’s degree from the University of Connecticut he started applying to medical schools but back in the 1970s “applications for medical school in the United States were absolutely incredibly numerous,” he recalled. “Although I was on the waiting list for two schools, neither one of them worked out, so I said ‘I’m getting old it’s time to get this done.’”

He went on to earn his medical degree at the Universidad Central del Este in the Dominican Republic in 1979. “I had a little bit of Spanish in college but I needed to learn a lot when I got there, that was the best way to learn,” he said.

Fluency in Spanish has come in handy, he said. “You don’t have as many Hispanic people in Bristol as in the Hartford community, for example, but it’s come in useful plenty of times.”

Whaley did the post-medical fifth-year pathway program at the UConn School of Medicine, his internship and cardiology fellowship at the Hospital of St. Raphael, and within a few years he was section chairperson for cardiology and director of cardiac rehabilitation at Bristol Hospital.

He has been attending cardiologist at Bristol Cardiovascular Associates since 1986, and served as its president from 1990 to 2105. Whaley and his colleagues from cardiology have been a part of the Bristol Health Medical Group since 2015.

“Dr. Whaley has demonstrated an unwavering commitment and dedication to Bristol Health, our community and his patients,” said Edward Henry, vice president, Ambulatory Services, executive director, Bristol Health Medical Group. “The quality and compassionate care that he has provided over all these years has had a direct impact on the quality of life of so many members of this community,” Henry said.

Now Whaley is looking forward to relaxing and spending more time with family, especially his two young grandchildren, while being careful about covid-19 exposure for the time being. He also wants to do some traveling but the pandemic is putting a crimp in that too for now.

He is also looking into some ways to stay active in medicine, including the possibility of filling in at practices where they need a temporary replacement for staff due to pregnancy or illness.

But he says he will miss his own practice “without a doubt.”

“Every day right now is emotional with a lot of the people I’ve been taking care of for so long a time. A lot of the older folks have tears in their eyes, saying how they’re going to miss me etc. etc. It’s very, very gratifying to say the least. These are people I’ve actually seen two or three generations of in the same family in the last 34 years,” he added.