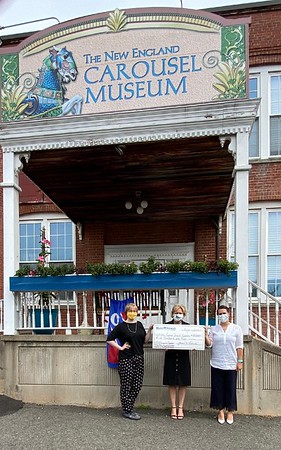 BRISTOL – The New England Carousel Museum has been awarded a $5,000 grant from The Main Street Community Foundation to create a virtual tour program for second graders in Bristol Public Schools.

The virtual tour will highlight the STEAM (science, technology, engineering, art and math) aspects of carousels and also give an overview of their history.

Morgan Urgo, executive director of the New England Carousel Museum said that originally the museum applied for a grant for an in-person tour with programs and activities. However, this was adjusted to go virtual due to covid-19.

“We rolled out virtual tours about a month ago and we’re working on creating the program for second graders,” said Urgo. “So far, we’ve given virtual tours to Simsbury Public Library, the National Carousel Association and individuals across the country. Covid has been very difficult for a lot of smaller institutions, but it has allowed us to get creative. So, we’ve pivoted and made our programs more accessible throughout the country to bring in a wider audience.”

Urgo said that the program for local second graders will “hit all areas” of STEAM learning.

“There is a lot of physics, math and geometry that goes into carousels,” said Urgo. “There’s also the historical component. Second grade is when our students start to learn about our local history. So, we will talk about our relationship to Lake Compounce and to carousel restoration.”

Urgo said that the virtual program will also show students the methods of how carousels are constructed. It will also explain to them the different styles of carousel design.

“The program will be supported with materials that will let them color their own carousel as a hands-on component,” said Urgo. “There will also be a sketching component and a literary component where students can create a story about one of our museum animals.”

The virtual program will also feature a musical component. Each student who participates will be given a recorder, which Urgo said they aren’t usually exposed to as part of the school curriculum until third grade.

“We’ll show them the Band Organ that we have at the museum and how the holes on it are similar to those on the recorder,” said Urgo.

The grant to fund the virtual tour program was supported by the following funds at the Main Street Community Foundation: Pat & Bob Wollenberg Family Fund for the Community, Sid Bernard & Ed Miller Children's Fund for the Visual Arts, and the Fuller & Myrtle Barnes Fund for Education.