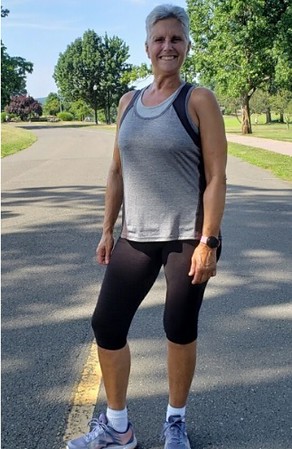 Courtesy photo | John Bennett, 69, of Kensington, one of the Central CT 60 Strong winners. Buy this photo

Courtesy photo | Jim Wrobel, 62, of Kensington, one of 12 winners in the Central CT 60 Strong initiative. Buy this photo

Courtesy photo | Lori Kelly, 60, of Bristol, one of the Central CT 60 Strong winners. Buy this photo

Dubbed as “a celebration of grit and resilience” the initiative was sponsored by Starling Physicians, a private medical practice in Bristol, New Britain and surrounding communities.

Eligible candidates were between the ages of 60 and 69, living in Central Connecticut and had achieved some kind of personal health or fitness feat while inspiring others through community involvement. A panel of judges included ESPN’s Toni Gonzalez-Collins, Janice Castle, from the Office of Hartford Mayor Luke A. Bronin, Terry Gerratana, with the state Office of Health Strategy, WTNH-TV anchor Rich Coppola and others.

This was the first year of the contest and a total of 49 nominations were received.

“I think the 12 nominees selected by our panel of luminary judges were chosen because they were so inspirational to others,” Hokanson said. “Some had achieved remarkable levels of fitness, others overcame specific health issues and all had contributed to local charities by continuing to pay it forward and that really made them stand out.”

Among them are New Britain natives Aurora and Ron Jakubowski.

Sweethearts from New Britain High’s Class of 1970, they just celebrated 45 years of marriage. Ron retired as New Britain Superintendent of Schools and Aurora was a social worker for 32 years, serving at New Britain General for much of her career.

The Jakubowskis have two sons, Jason and Nicholas, both leaders in the local non-profit sector.

“My parents are strong believers in the importance of maintaining both their physical health and their mental health,” said their son Jason, who nominated his parents. “My mom is a 16-year breast cancer survivor and a longtime advocate for women’s health issues. My dad has a strict daily exercise regimen and promotes good physical health as a baseball coach at New Britain High. Both are avid volunteers. They have made my brother Nick and I who we are today.”

Aurora told the Herald she was excited there was even such a program to celebrate people who are strong over 60.

“My husband and I will talk about how we still feel so young and how old our parents seemed at our age,” she pointed out. “We’ve been through a lot but we’re at a really good place in our lives. Most of all, we’re still in love.”

Another winner was John Bennett of Kensington, turning 70 next year.

Although currently in rehabilitation after a knee replacement and living with osteoarthritis, hypertension and other ailments, Bennett lives by the motto, “Life is a marathon, not a sprint.” He coached wrestling at Newington High School from 2011 to 2016 and was inducted into the National Wrestling Hall of Fame.

“I have had a lifetime of good fortune to volunteer my time working with a wide variety of people, from elite athletes to those afflicted with autism, blindness, Parkinson’s and down syndrome,” Bennett said. “I try to lead by example, helping others to have a positive impact and be a part of the greater good.”

Plainville resident Eileen Cyr, turning 66 on Sept. 23, went from being an overweight teen living an unhealthy lifestyle to changing her life with a membership at the YMCA.

Cyr went on to become the first female program director at the Wheeler Regional Family YMCA in Plainville. Now retired, she walks five miles a day, bikes, hikes, kayaks, and sings. She’s volunteered as an exercise instructor at the Plainville Senior center and spent 16 years at Hartford Hospital as a Reiki practitioner.

Bristol resident Lori Kelly, 60, also changed her world with a healthy exercise routine. A longtime member and instructor at HealthTrax in Bristol, Kelly has lived with Multiple Sclerosis for the last 20 years.

Another 60 Strong Ambassador is David Norton, 68, of New Britain. A championship swimmer and founder of the Cornerstone Aquatics Center, Norton continues to be an active, gold medal-winning athlete in the master’s league. Professionally, he serves as director of the Hartford Hypnosis Center, helping people through their struggles with anxiety and depression through expertise in counseling and hypnotherapy.

Kensington resident Jim Wrobel, another winner, worked in finance for 33 years and retired at 55 only to become an avid volunteer with Foodshare and animal rescue organizations. Wrobel, now 62, spent over 40 years in the Boy Scouts. He loves hiking, travelling to U.S. National Parks and long walks with his dog Maverick.

The other six were Michael Tutler, of Wethersfield, Delores Slaughter-Hinton, of Hartford, Cynthia Bastiany, of Windsor, Glenn Cassis, of Bloomfield, Gail Gillman Elansky, of Old Saybrook and Deb Meincke, of Hebron.

Each will be featured in a different month on the 2021 Central Connecticut 60 Strong Calendar, expected to be released this October and available for purchase at CentralCT60Strong.com. Proceeds will benefit Foodshare.

The initiative was launched in conjunction with Starling’s Senior Care Advantage program.