Justin Muszynski | Staff Doctors, nurses, leadership and others at Bristol Health came together early Wednesday morning to bring awareness to some of the health disparities that affect the black population in this country. Buy this photo 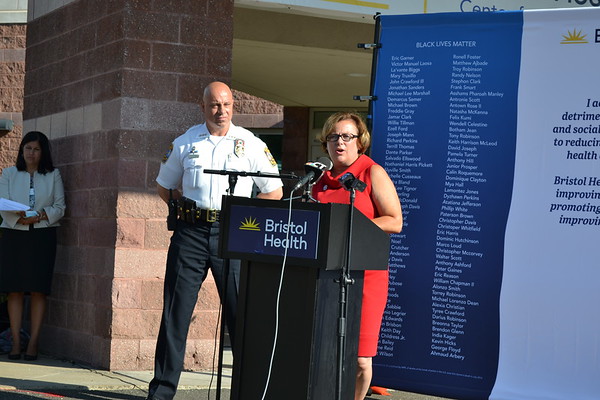 BRISTOL -- Doctors, nurses, leadership and others at Bristol Health came together early Wednesday morning to bring awareness to some of the health disparities that affect the black population in this country.

The gathering, entitled White Coats for Black Lives, took place in one of Bristol Hospital’s parking lots, where members of the healthcare group discussed some of the effects that race, gender, socioeconomic status and other factors can have on the level of care individuals receive. More than 100 doctors, nurses and others with Bristol Health, many of them holding signs that read things like “We care,” “#Courage” and “Health literacy,” pledged to help reduce the impact disparities have on the health of Bristol and surrounding communities.

Keona Dawson-Camerota, an advanced practice registered nurse who is part of the Bristol Health Medical Group, cited a number of health disparities that are closely linked to social, economic and environmental disadvantages. These include racial or ethnic groups, socio-economic status, gender, sexual orientation and other factors that have been linked to discrimination or exclusion, she said.

“Bristol Health and Bristol Health Medical Group want the city of Bristol and its surrounding communities to know that Bristol Health and its healthcare institutions stand with you during this uncertain time,” Dawson-Camerota said. “We stand in support of those who are affected and impacted by social injustice. We are addressing racial and ethnic and cultural inequities within our communities and our healthcare industry. And we are engaged to have difficult, uncomfortable and crucial conversations to make a fundamental change.”

“This represents the largest disparity among all the conventional population perinatal health measures,” Rawal-Dhingra said.

Lexie Mangum, who sits on the Bristol Health Board of Directors and is the president of the Bristol NAACP, talked about some of the work both organizations have done to better the community and eliminate disparities in healthcare.

“In 1909, a group of white and black people came together for one cause: to discuss black lives and racial injustice. This day in New York formed the largest and most recognized civil rights organization called the NAACP,” said Mangum.

Mangum added that, “111 years later, the Bristol branch of the NAACP continues the commitment of its founders to promote community diversity and protection of the civil rights of all Bristol” and the community.

“Today we are proud to stand and collaborate with Bristol Health to work to eliminate disparities of health among African Americans,” Mangum said.

Mayor Ellen Zoppo-Sassu, who was also invited to speak during the event, highlighted some of the things that city officials have done to ensure that public health is a priority for its residents.

“We have traveled through neighborhoods over the last 15 years with the city’s code enforcement program to ensure that every resident, regardless of socioeconomic status, skin color, household income, is living in safe and sanitary conditions,” Zoppo-Sassu said. “That is one of our missions because we know that it is closely linked to healthcare. Whether it’s lead contaminants or mold or any of the other issues, we know that some of our older housing stock, which is not well-maintained or has absentee landlords, we know that the people that are living there are at risk.”

Bristol police Chief Brian Gould said listening to the speakers on Wednesday served as an educational experience for him.

“The way we’re going to make things better is learning about it and being educated about it,” Gould said. “We’re all in this together, and that’s the only way we’re all going to get through this, is together.”

Gould noted that there a lot of things going on around the country that are creating division and “lines drawn in the sand.”

“This is a time when we need to come together,” the police chief said. “Only love, caring friendships and partnerships are going to do that. And the stuff going on here, our community has been great.”

Gould discussed some of the ways city leaders, police and Bristol Health have teamed up to address issues directly affecting the community, including the opioid crisis. In November, the City of Bristol’s Recovery Alliance (COBRA) program launched, which gives police the discretion to get someone who illegally uses substances or abuses alcohol treatment instead of arresting them. Under the program, those in need of treatment are given the option of arrest or getting help, at the discretion of an officer.

Bristol Health Vice President of Human Resources Christine Laprise went over some of the things the healthcare group is doing, aimed at addressing social injustices.

The Bristol Health Diversity Committee, Laprise said, is launching the 8:46 Program, which will encompass some of the activities Bristol Health is already doing, such as partnering with the NAACP on health disparities, the Million Jobs Campaign and the Diversity Internship Program, and expands it to include greater access to data and statistics to further inform health inequities within the community. The program will create and foster additional community partnerships as well as grow existing partnerships, she added.

The Diversity Committee will report out 8:46 activities and initiatives to executive leadership monthly, creating accountability and sustainability. The 8:46 represents the eight minutes and 46 seconds that George Floyd had a knee on his neck, pinning him to the ground before he died.

Additionally, Laprise said, Bristol Health will be requiring all employees to take mandatory unconscious bias training to be completed before the end of the year.

“Bristol Health remains committed and focused on eliminating social and health disparities not just today, but every day,” Laprise said.

The gathering concluded with a moment of silence to honor those affected by social injustice. Bristol Health employees and community leaders also signed a banner acknowledging racial and social injustice, pledging to help reduce their impact on the community.