Brian Johnson Staff The Back the Blue Parade departing from Yankee Harley Davidson in Bristol. Buy this photo

Members of the Bristol police and fire departments with representatives from the Ocean State Job Lot and Mayor Ellen Zoppo-Sassu. Buy this photo 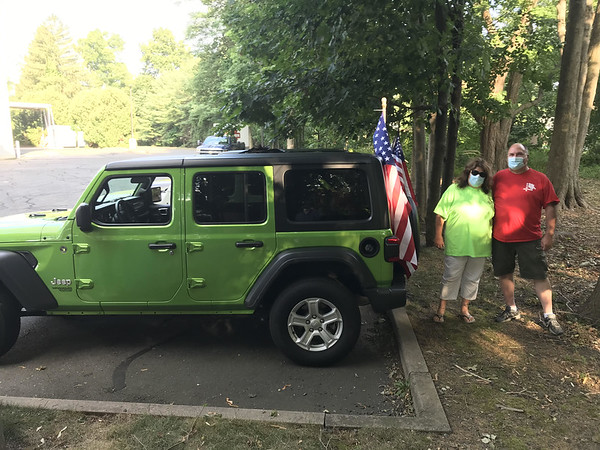 Brian Johnson Staff Barbara Santello and Mark Palmer at the Back the Blue parade with their jeep. Buy this photo 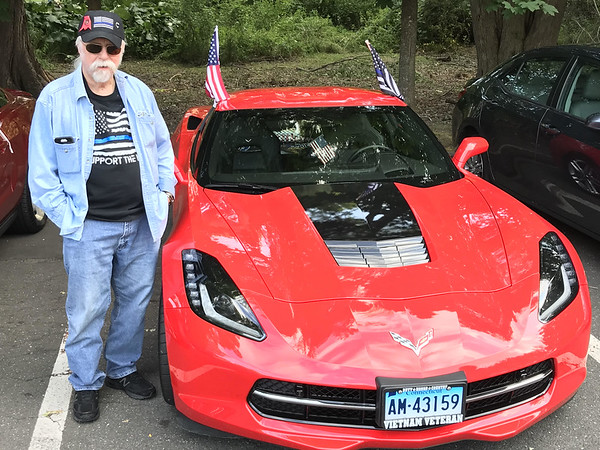 Brian Johnson Staff Doug Capsalors with his car which he drove in the Back the Blue parade. Buy this photo

The ‚ÄúBack the Blue‚Äù parade saw Yankee Harley Davidson packed full of more than 200 people who rode in on motorcycles, classics cars and trucks and jeeps, flying American and Back the Blue flags to show their support for police.

There were also several motorcycle clubs, such as police biker group Arresting Souls and the Rat Pack Motorcycle Club, as well as other police supporters from Bristol and the surrounding communities.

The atmosphere was one of camaraderie and patriotism with children passing out American flags for adults to wave. After chatting for a bit in the lot, participants began their ride, joined by police on motorcycles and fire trucks which enthusiastically honked to show their thanks. The ride took participants past the Bristol, Plainville and Farmington police and fire departments before they would ultimately gathered for dinner at the Farmington Knights of Columbus.

The event was organized by Nicole Morin. Jeannine Miller and Morin were selling ‚ÄúBack the Blue‚Äù yard signs at the event, with proceeds supporting the Bristol, Plainville and Farmington police departments.

‚ÄúThis was a huge turnout, even with the outages,‚Äù said Morin, who said that even though some of their route had to be altered, she was very pleased with how the event turned out.

Barbara Santello and Mark Palmer, of the Nutmeg Jeepers group, were among the parade participants. Their green Jeep was adorned with flags on the back.

‚ÄúWe came out to support the police department,‚Äù said Santello. ‚ÄúMy daughter, Madison, is in the police explorer training program in Bristol and she will be saluting us as we go by.‚Äù

Steve Chagnon, a volunteer Bristol EMT, said that his son, Michael, is serving in the Navy and the experience that he got as a police explorer helped to prepare him for his service.

John Salke, of Prospect, said that police have been ‚Äútaking it on the chin for long enough.‚Äù

Peter Cipriano, also of Prospect, added that the ‚Äúsilent majority has been silent for long enough.‚Äù

Doug Capsalors, of Bristol, who had American and Back the Blue flags hanging off the back of his sports car, said that police put their badges on every day to serve and protect and that an event like this is ‚Äúthe least we can do.‚Äù

Lt. Michael Duval, who was among the officers present at the event, said that it was ‚Äúnice to have the support.‚Äù