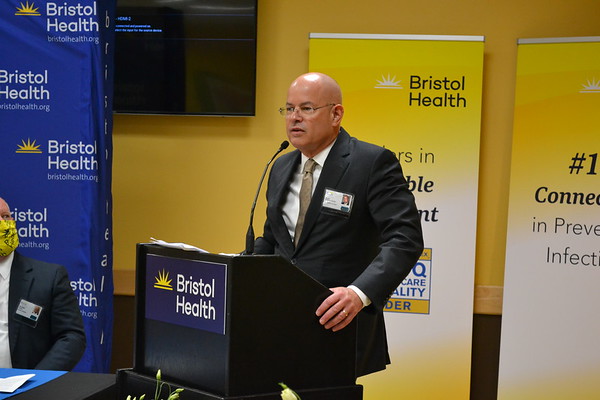 Justin Muszynski | Staff Bristol Health was presented the Silver Recognition during a ceremony at the hospital Wednesday. Buy this photo

BRISTOL - Bristol Health has become the first healthcare system in the state to earn a Silver Recognition, achieving the feat in the 2020 ExcellenceNorth Alliance (ENA) Baldrige-based Awards and Recognition.

Bristol Health officials held a small ceremony at the hospital Wednesday, when they were formally given the recognition - which is based on a healthcare system’s “commitment to safety, high reliability, transparency and the community it serves” - by the ENA, a nonprofit that helps organizations achieve its goals, in partnership with Partners in Performance Excellence, a nonprofit that does assessments, recognition, workshops and other efforts to support performance excellence.

Anne Warner, executive director at ExcellenceNorth Alliance, said she believes hospitals that use the Baldridge framework have navigated the pandemic better than those that don’t.

According to Bristol Hospital officials, the process evaluates a healthcare system’s “strengths and improvement opportunities against the internationally-recognized Baldrige Framework for Performance Excellence….”

Warner noted that the site visit to evaluate the hospital was originally scheduled for late March. But after the coronavirus pandemic hit, that visit was pushed back.

Warner said leadership at Bristol Health was diligent in pushing for the visit to be rescheduled as soon as possible.

“I want to let you know that is not always the case,” Warner said, adding that the hospital “earned” the recognition.

“I emphasize earned,” she said. “ This is an earned achievement, and this is earned by all of you working together.”

The Silver Recognition is the first step in Bristol Health working toward earning the Malcolm Baldrige National Quality Award, which hospital officials say is the only formal recognition “for organizations seeking out performance excellence that is given by the President of the United States.” The award is named after Baldridge, who served as the country’s 26th Secretary of Commerce during President Ronald Reagan’s administration.

“I’ve worked in organizations where I tried to achieve magnet status and other recognitions, and even tried Baldridge going back 20 years ago, and the support wasn’t there,” Bristol Health President and CEO Kurt Barwis said. “You would get: ‘It costs a lot of money.’ ‘Do we really need to do this?’”

Barwis credited the Bristol Health Board of Directors with encouraging hospital officials to “think about performance excellence in everything we do.”

“This community is well served by its board of directors,” Barwis added.

Baldridge, Warner said, is about “connecting the dots, getting rid of the silos and working together to ensure that everything goes correctly between departments and learning and continuously improving.”

“And that certainly is part of your foundation,” Warner said to Bristol Health officials.