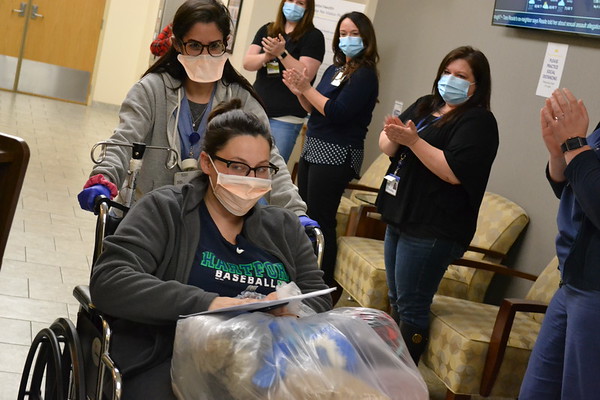 Nolan, who is 34 weeks pregnant, was discharged from the hospital Friday to a goodbye that has become the norm at the hospital - doctors, nurses and other staff lined the hallways near the hospital‚Äôs entrance and clapped for her as she left. ‚ÄúGonna Fly Now,‚Äù the theme music to the movie ‚ÄúRocky,‚Äù played as staff at the hospital celebrated another triumph against a nasty virus that has killed more than 68,000 people in America and nearly a quarter of a million worldwide.

‚ÄúIt was very scary,‚Äù Nolan said during a brief interview, as she waited for her husband to pull his car up to the hospital entrance.

In addition to having a baby girl on the way, Nolan also has a 2 and-a-half-year-old son.

‚ÄúLuckily he was able to watch my son,‚Äù she said of her husband, who also contracted COVID-19 but did not need to be hospitalized.

Nolan also said that she was worried about her baby.

‚ÄúThe doctor was confident she would be OK,‚Äù she continued, adding that the staff at the hospital monitored the baby closely while Nolan was in the hospital.

According to the Centers for Disease Control and Prevention, it is ‚Äúunlikely‚Äù that a mother will pass on the virus to a baby in the womb.

Since the outbreak began, Bristol Hospital has now discharged 68 people who either had or may have had the virus.

Heather Machado, director of patient and customer relations at Bristol Hospital, said hospital staff are given about a 10 minute notice before a COVID-19 survivor is discharged. Like many hospitals around the country, the Rocky music is hit as the patient is escorted out of the hospital in a wheelchair.

‚ÄúThat was really nice,‚Äù Nolan said of her goodbye from hospital staff.