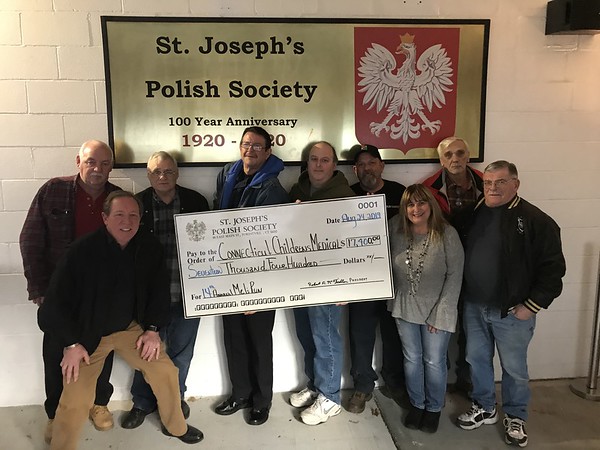 BRISTOL - As St. Josephâ€™s Polish Society readies to celebrate its 100th anniversary in February, club members reflected upon all they accomplished in 2019 with the support of the local community.

â€śIâ€™ve been a member for 20 plus years and Iâ€™m 50 years old; the society has been around twice as long as I have,â€ť said Richard Parent, society permittee. â€śWe really appreciate the brotherhood of guys that come together to continue our tradition of service. We canâ€™t thank them enough.â€ť

These community-minded individuals have been coming together for more than a decade to raise significant amounts of money for two charitable causes: Melâ€™s Run and the societyâ€™s annual Golf Tournament. Both have received tremendous support from community business sponsors.

â€śOver the past 11 years weâ€™ve raised about $90,000 for local food pantries,â€ť said McFadden. â€śWe get a good turnout and we keep it inexpensive - $85 with dinner included. Our society is involved a lot in the community and that wouldnâ€™t be possible without our sponsors from the local business community. We also support Forestville Little League and the Bristol Sports Hall of Fame.â€ť

This year, the golf tournament will be held June 5.

Melâ€™s Run was established in 2006 following the death of club member Melvin Chesky in 2005.

In his memory, each year, an average of 125 motorcycle riders get together to ride to raise money for the Connecticut Childrenâ€™s Medical Center Endocrinology Fund. In August 2019, at the 14th annual event, the society raised $17,400 for the fund.

â€śThe number keeps going up every year,â€ť said Parent. â€śWeâ€™ve come a long way from our first year when we raised $2,500.â€ť

More details about how the society will celebrate its 100th anniversary will be announced in the future.

Parent thanked all society members past and present for helping to reach this milestone and newer members for stepping up to â€śpick up the flag and march forward.â€ť