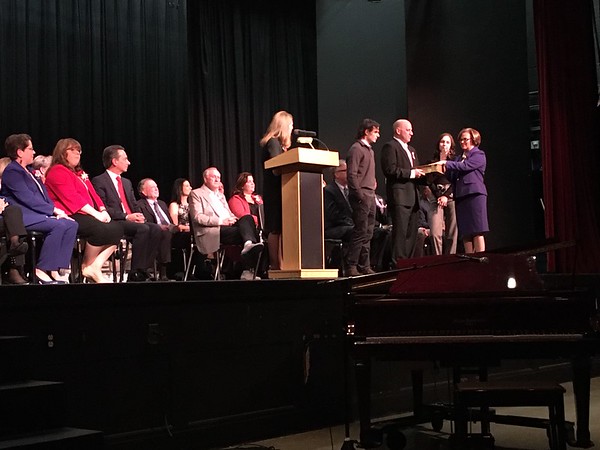 The event is traditionally held on the Monday following elections, which this year happened to fall on Veterans Day, so the honoring of veterans was incorporated into the ceremony.

As the audience began to filter in, they were greeted by the sound of a piano being played by Al Caruso, a World War II veteran whose son-in-law, David Preleski, was re-elected to the City Council this past Tuesday.

The event began with the introduction of a color guard from American Legion Post 2, followed by a rendition of the national anthem by Bristol resident Maria Salice and a moment of silence.

After a brief invocation delivered by the Rev. Thomas Baran of Grace Baptist Church, the oaths of office began.

Board of Education members were the first to recite their oaths, followed by the Board of Assessment Appeals and the City Council.

Before Mayor Ellen Zoppo-Sassu took her oath, Lt. Gov. Susan Bysiewicz, be a close friend of Zoppo-Sassu, gave a short speech that began with a claim that she always knew Zoppo-Sassu would one day be mayor of Bristol.

“There was no doubt in my mind,” Bysiewicz said. “It is clear that Ellen loves Bristol and I think Bristol loves her back.”

The mayor’s oath was followed by a short address in which she expressed her appreciation for veterans, reflected on what went well in her first term and detailed her plans for her next term.

“By paying attention and listening, we are laying the foundation for a future where public service is seen as honorable and that elected officials must earn and keep the trust of those they seek to lead,” Zoppo-Sassu said.