On Veterans Day, Bristol honors and thanks those who served

Brian Johnson Staff Local veterans from all branches of service stand at the end of the Armed Forces Medley during the Veterans Day Ceremony at Chippens Hill Middle School. Buy this photo 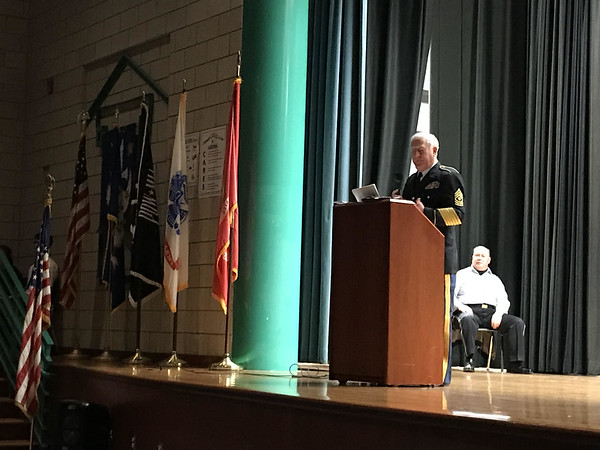 BRISTOL - The community came together Monday to honor and thank those who have served their country at a Veterans Day ceremony at Chippens Hill Middle School.

The room was packed with veterans and people mindful of their sacrifices as speakers noted the bravery and heroism of members of the U.S. military past and present.

The opening prayer was provided by Deacon Stanley Piotrowski.

“On this, the 100th anniversary of Veterans Day, we say thank you for continuing to bless all of our veterans throughout the world that have served or are still serving,” said Piotrowski. “Keep them safe and free of harm. We ask that everyone remember what those veterans fought for so each of us could be here today.”

In his opening statements, Bristol Veterans Council Chair and former Mayor Art Ward encouraged veterans to contact the Department of Veterans Affairs. He told them that the VA will cover medical expenses related to their service and encouraged them to call 1-800-827-1000 to get connected with a veterans service officer.

Following the MIA/POW ceremony, conducted by Ward and Chuck Bouffard, Mayor Ellen Zoppo-Sassu spoke on behalf of the city.

“This ceremony is important to lay the foundation for how the city of Bristol defines itself,” she said. “Bristol has always done an above average job in treating veterans with respect and dignity.”

Zoppo-Sassu also thanked local veterans for being supportive of her while her son and nephews serve. She encouraged parents of those now serving to contact City Hall about having pictures of their children displayed.

David Connelly Sr., who served four years with the Navy, including time in Vietnam, as well as with the National Guard for 27 years, was the guest speaker. A retired first sergeant, he spoke wearing his uniform as he acknowledged fellow veterans.

“Thank you for answering the call of duty,” he said. “It is because of your sacrifices that we are free. It doesn’t matter why you did it; it matters that you did. I’m glad to see that young people still have a love for their country and the pride and courage to defend it.”

Connelly also recognized the families people serving in the military leave behind. He said he went through this when his son served in Iraq and that he’d rather be serving, in harm’s way, than waiting at home.

He also gave a history of Veterans Day, which was originally Armistice Day to celebrate the end of World War I and was later expanded to include all veterans.

A Terryville dance academy, Reach for the Stars, then had children perform, set to a patriotic song, followed by the reading of a poem dedicated to veterans by Bristol resident Delores McDaniel during her service in the Women’s Army Corps as a dental assistant in the early 1950s.

A military branch medley was then played, with veterans in the audience asked to stand and be applauded when their branch’s anthem played. At the end, they were all invited to stand together.

The names of local veterans who had died since last year’s ceremony were then read by students Morgan Greger and Logan Williams of Bristol Central, Mark Tata of Bristol Eastern and Sammi Bray and Richard Scott of Saint Paul Catholic High School.

A rifle volley was provided by members of American Legion Post 2, after which taps was played.

“A veteran - whether active duty, discharged, retired, or reserve - is someone who, at one point in their live, wrote a blank check made payable to The United States of America for an amount of up to, and including their life,” he said, reading a quote by an unknown author on the back of the event program.