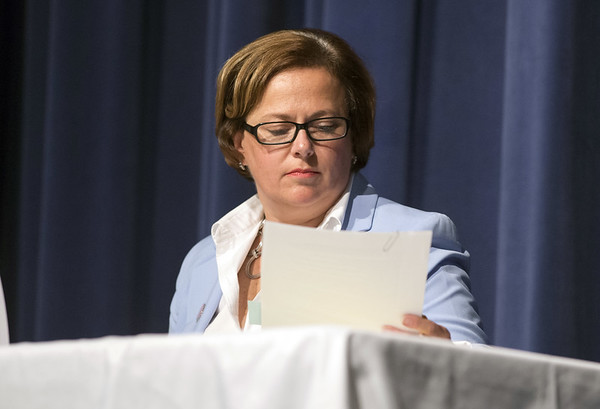 Wesley Bunnell | Staff Candidates for mayor and City Council met on Tuesday night at St. Paul Catholic High School's Auditorium for a question and answer forum for council candidates followed by a mayoral debate. Mayor Ellen Zoppo-Sassu looks over her notes as her opponent speaks. Buy this photo

BRISTOL – City voters got a chance to hear from Mayor Ellen Zoppo-Sassu as she seeks a second term and to get to know her challenger Dante Tagariello Tuesday night, at a candidate forum sponsored by the Bristol Chamber of Commerce at St. Paul Catholic High School.

“The first priority the City Council and I tackled was creating a positive environment and a positive climate for both businesses and the people who live and work here,” she said. “We know that it is extremely important for people feel good about where they live and work, and from that many positives can flow.

“We have accomplished this by creating public private partnerships, by leveraging resources, by working with our employees, and creating collaborations that are going to save money but also sustain long term viability for our city moving forward,” she continued. “At the forefront of all of these policies is economic development, which is the fuel for our grand list, which has grown $1.1 million over the last year.”

Zoppo-Sassu said her administration has 654 new business accounts registered with the assessor’s office. She and Justin Malley, Bristol Development Authority executive director, “have made over 100 business visits to those who are already here, those thinking about coming, and those that are looking to expand, as well as a few that need a helping hand.”

“We’re also looking to make some structural changes in the way government delivers services and that’s critical for sustainability,” she added.

She noted that she has made the opioid addiction problem a priority issue because it affects both families and employers, “who are looking for a qualified work force who are going to come to work not impaired.”

Zoppo-Sassu offered a snapshot of her day, “because I think when you are an All Heart community you have to live it, not just say it.”

“Today I started at Starbucks, where I had a conversation with a business owner who was paying it forward with a customer who looked like she was down on her last dime,” she said. “I moved on to Mountain View [School] for the new playscape opening. We went to Bristol Hospital to talk to the pastoral staff, about the opioid crisis.”

“And then I got an email saying that we’ve been affirmed for our bond ratings by both [rating agencies] - AAA for one, and AA+ for the other,” she added. “It was a good day.”

Republican Tagariello introduced himself as “a lifelong resident of Bristol and a graduate of Bentley University.”

“Currently and for the past several years, I have worked as a corporate tax accountant for the world’s fifth largest public accounting firm,” he said.

“The theme of our campaign is a new generation of accountability,” Tagariello continued. “What that means is our sstance on government is a departure from rhetoric. That’s why we’re the only team with a plan to implement performance based budgeting to better connect our dollars and resources.”

“Simply put, our promises aren’t for election’s sake, but to drive solutions that are both trackable and tangible to taxpayers,” he said.

In response to a question about the definition of being fiscally responsible, Tagariello said he looks back to “a few years ago when we raised our grand list by $68 million, and delivered periods of 0% tax increases.”

“For me fiscal responsibility is about looking at ways to be innovative, in order to deliver not just the same level of services but increased quality of services through technology. That’s why we have released a plan about investing in technology in our city because when I talk to my clients at work I see some of the great programs that they use, like Tableau and Alteryx, which use data analytics to provide services to the customers at no extra cost,” he said.

Tagariello said his opponent could talk about eliminating city positions through attrition and merged services, “but what we don’t want to hear about is how we’ve raised the cost of government by $10 million.”

“I think that when we talk about efficiencies we have to actually put a plan in place in order to create those efficiencies, so for me it’s about looking at ways in a modern context to deliver results,” he added.