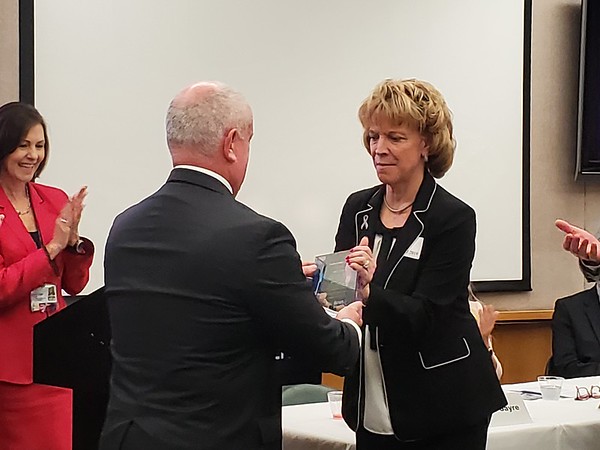 BRISTOL - Bristol Hospital officials on Tuesday took a look back on its breast cancer treatment and how it went from one of the worst programs in the state to one of the best delivered in a spa-like setting.

“The community really came together and solved this problem,” Dr. James Sayre, medical director of the Beekley Center for Breast Health and Wellness, said during a President’s Forum Tuesday at Bristol Hospital.

As recently as the 1980s, Sayre said, breast cancer was generally diagnosed when a woman found a lump in her breast.

“I rarely see that,” he said, referring to today’s breast cancer diagnoses, which are done by seeing a “tiny shadow” in a breast exam.

By the 1990s, Sayre said, Bristol Hospital’s breast cancer program was still lacking in its mammography rate, as about two thirds of other communities did a better job at that time. But by 2000, he continued, this rate was in the top three in the state after hospital officials found ways to break through the barriers to women regularly getting screened for breast cancer, including financial issues, fear and other factors.

Dr. Stewart Bober, radiologist, noted that, across the nation, breast cancer mortality rates have fallen by about 40% since the late 1980s to 2019.

Today, women who are uninsured or underinsured are given free mammograms at the Beekley Center for Breast Health and Wellness, which is celebrating its six-year anniversary this month.

“In Bristol, nobody is denied a mammogram,” Sayre said.

In 2013, the Beekley Corporation made a $1 million donation to help get the breast health center built.

Mary Lynn Gagnon, executive director of the hospital’s development foundation, added that, in her three and a half years with the hospital, Beekley has made donations that allowed for the purchase of three machines that are critical to top-notch breast cancer screening and treatment.

In being presented the awards, LaPlant gave special recognition to the staff at Bristol Hospital and the Beekley Center for Breast Health and Wellness.

“They are caring and compassionate,” LaPlant said.

“The environment is fabulous,” she said, adding that patients of Beekley are given a heated robe before their exams. “It is done in the most caring and professional way.”

Jeannie Robbins, clinical service line director, said the women who visit the Beekley Center for Breast Health and Wellness are very grateful that they can receive all their breast health treatment in one convenient center in a spa-like setting.

“Women don’t mind coming and getting their mammograms,” she said. “They actually say they love coming here to get mammograms.”

The services offered at Beekley include 3D mammography, ultrasound-guided biopsies, massage therapy, an onsite surgeon, a nurse navigator who guides patients through what can be an overwhelming experience, and many others.

Robbins on Tuesday encouraged all those who attended the forum to, if nothing else, take away one message: “Early detection is key.”