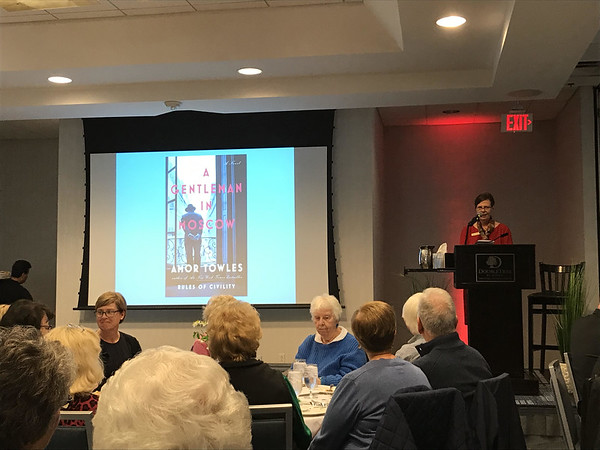 Brian Johnson Staff Author Amor Towles speaking to the Friends of Bristol Public Library and guests at DoubleTree by Hilton. Buy this photo

Brian Johnson Staff Crowd shot of the audience at Amor Towles' talk at DoubleTree by Hilton. Buy this photo

BRISTOL - The Friends of Bristol Public Library joined bestselling author Amor Towles for a discussion of his second novel, “A Gentleman in Moscow” Thursday at DoubleTree by Hilton.

As guests entered the hotel, they were treated to pianist Hyuna Park of La Vie En Rose playing a medley of music mentioned in the book. At each table, the table number card included the first page of the corresponding book chapter. There was also a replica Hotel Metropol Moscow hotel key and apple blossom flowers mentioned in the book. The event program was designed to resemble the hotel’s menu and Russian food was served. Guests were invited to write questions down for Towles to answer.

The meeting room was packed, each table was filled with guests. Several of them brought copies of the book with them.

Peg Plouffe, of Bristol, said it was the first time she came to an author discussion.

“I loved the book and I’m curious about what he (Towles) is going to say,” she said. “I like the way he connected the story to historic facts and it made me more curious to find out what happened to the aristocracy at that time.”

Deborah Prozzo, library director, and Rose Ann Chatfield, co-chair of the Friends of Bristol Public Library, thanked all those who made the event possible.

“It’s so nice to see so many library friends here,” said Prozzo. “As far as I’m concerned this is the greatest literary event of the year.”

Mayor Ellen Zoppo-Sassu said she was excited to have an author of Towles’ significance in Bristol.

“Our role as public officials is to bring out the best in the community and there is no better place to start than the library,” she said. “If they are able to pull off an event like this it shows they are doing something right.”

Towles gave the Russian historical context behind the book and explained his inspiration for the story.

The book begins in the 1920s with the main character being put on trial by Bolshevik revolutionaries. He had written a song that the revolutionaries enjoyed, but he was an unrepentant aristocrat. As a compromise, he was allowed to stay at the Metropol he’d been staying at under the condition that he would be shot if he ever left. The book tells the story of his next 32 years trapped in the grand hotel.

Towles said he was inspired to write the story when he was working as a spokesman for an investment company. He recalled staying at different hotels around the world for intervals of a week at a time.

“One week when I arrived at a hotel in Geneva I recognized some of the same people in the lobby from the year before,” said Towles. “I thought it was like they never left. Then I started thinking about what it would be like to be trapped in a hotel. I began sketching out the story on hotel stationary. I knew the main character should be there by force and that made me think of Russians ‘for some reason.’”

Towles said he chose the Metropol because of its proximity to several important Russian sites, its role in Russian history and the building itself. The building, he said, is the size of a city block, has hundreds of rooms, and was the best hotel in Russia in 1905 - one of many “grand hotels” built at the time.

The hotel was seized by the communists and used for a government building, its luxurious furnishings removed. It was later restored to its former glory and used to entertain foreigners while Russian citizens were forbidden from going there. However, party officials soon found they enjoyed the luxury hotel and started going there.

Scott Stanton, assistant director at Bristol Public Library, said this was the fourth author discussion that the Friends have hosted. However, Towles is the most renowned guest speaker thus far. “A Gentleman in Moscow”, published in 2016, was on the New York Times Bestseller list for a year. It was named one of the best books in 2016 by The Chicago Tribune, The Washington Post, the Philadelphia Inquirer, The San Francisco Chronicle and NPR.

“He has been speaking at major cities but to have him here is a real opportunity for Bristol,” said Stanton. “He is known all over the world and this program is drawing book groups from throughout the area. Our first author discussion had under 200 people. This year we sold 275 tickets in three weeks.”