Susan Corica | Staff The City Council and Mayor Ellen Zoppo-Sassu honored Dave Mills Tuesday as he retires after four terms on the council. Buy this photo 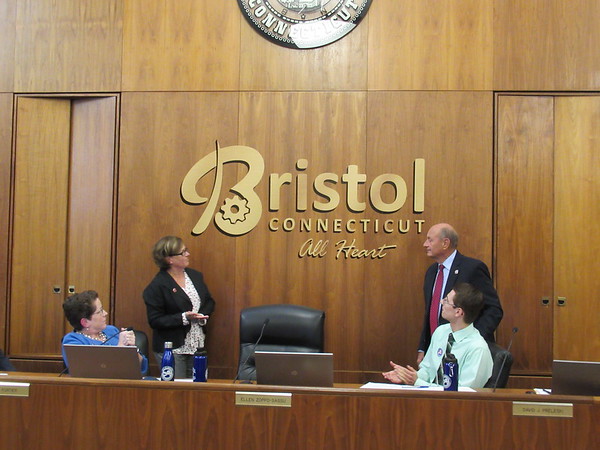 BRISTOL - ‚ÄúIt‚Äôs kind of unbelievable that at 66 someone comes to you and says did you ever think about running for City Council,‚Äù said Dave Mills Tuesday night, on the occasion of his last council meeting.

‚ÄúMost of the time if you‚Äôre 66 you don‚Äôt even think about running, but I said well it could be a challenge. It could be something I might enjoy doing. I was never involved in politics at all, when you‚Äôre working as a teacher and coach, you don‚Äôt have time for politics,‚Äù he said.

‚ÄúBut it was a great experience for me. I‚Äôm glad I got into it. It‚Äôs nice to go undefeated at something - to win four terms,‚Äù he continued.

‚ÄúI just want to thank everybody, it‚Äôs been a great experience,‚Äù he added.

‚ÄúIt has been a pleasure serving with him over the last two years,‚Äù said Mayor Ellen Zoppo-Sassu. ‚ÄúWhenever he has been called upon to fill in to do whatever needs to be done he has been there. It has been just a great working relationship and we‚Äôre definitely going to miss him on the council.‚Äù

His fellow councilors echoed her comments.

‚ÄúYou‚Äôve set the bar quite high insofar as political discourse is concerned and that is sorely needed in today‚Äôs political arena, and you‚Äôre a trusted voice of reason,‚Äù said Peter Kelley. ‚ÄúI‚Äôm proud to have served with you and consider you a friend.‚Äù

‚ÄúIn coming on to City Council these last two years, one thing I‚Äôve always appreciated about you, although we have disagreed on topics from time to time there was never a question you were always striving to put Bristol first,‚Äù said Greg Hahn. ‚ÄúI appreciate the work and the leadership you gave to us and you will be sorely missed.‚Äù

‚ÄúDave, thank you for serving District 3,‚Äù said Mary Fortier. ‚ÄúYou‚Äôve been just a gift to Bristol. Your service both in the sports world and here at City Council. You definitely represent what Bristol All Heart is and we will miss you.‚Äù

Dave Preleski said Mills was one of the first people he talked to when he decided to run for council. ‚ÄúI can‚Äôt believe it has been four years since we‚Äôve been sitting next to each other and we‚Äôve spent countless hours on committee work. There is no man with greater integrity than Mr. Mills, and it‚Äôs been a pleasure, Dave,‚Äù he added.

‚ÄúSince I‚Äôve come onto the council you‚Äôve been more than helpful to me in making me find my way in the ranks here,‚Äù said Scott Rosado.

‚ÄúDave Mills is the kind of person you‚Äôre really proud to know and to work with,‚Äù said Justin Malley, Bristol Development Authority executive director. ‚ÄúDave is a very calm, reassuring character, and sometimes working in City Hall is not calm or reassuring, so it‚Äôs nice that it‚Äôs very easy to work with someone like Dave who we know will support us and encourage us to do good things.‚Äù

In addition to being a lifelong city resident, a retired football coach, and a grandfather, Mills has been the only Republican on the City Council this past term.

His experience includes a total of four council terms - two before his wife, JoAnne, passed away in 2013 and two afterwards. He has said he still misses her every minute of every day, but his four adult children and nine grandchildren are there to keep him busy.

Mills attended Southern Connecticut State University in the early 1960s and, by chance, ended up back in his hometown, teaching physical education at Bristol Eastern High School.

He was married a year later, in 1965. During their honeymoon, Eastern‚Äôs head football coach left. At 22 years old, Mills was offered the position, which he gladly accepted. He coached for the next 26 years, also coaching girls basketball some of that time. He didn‚Äôt get into city government until after retiring in 2000.

Athletics is another defining feature of Mills‚Äô life. He follows the New York Yankees and the New England Patriots. He‚Äôs also a board member on the Bristol Sports Hall of Fame and spent 13 years as its president.