Viking for a day: Ax throwing comes to Bristol 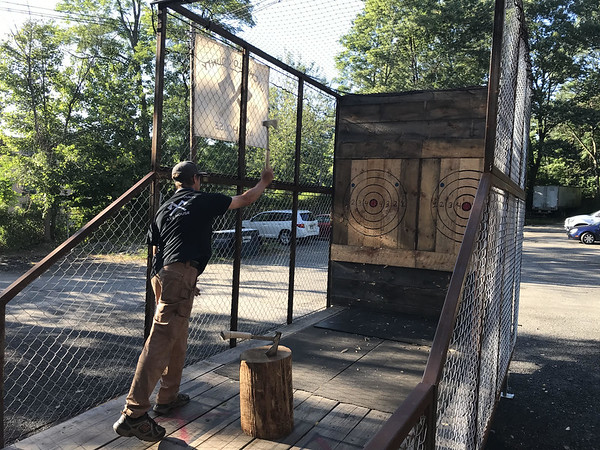 Joe Kucia, of Plymouth, who founded Litchfield County Axe House earlier this year, said that he is looking to eventually open a permanent range in Bristol - spurred on by the openings of local breweries.

However, in the interim, people will be able to try their hand at the sport Mondays from 5 to 9 p.m. in back of Firefly Hollow at 139 Center Street. Ax throwing will also be taking place at Better Half Brewing at 59 N. Main St. during the Mum Festival, Friday from 5 to 10 p.m., Saturday from noon to 11 p.m. and Sunday from noon to 7 p.m.

“I saw that adult entertainment like billiards and bowling was starting to gradually fade out,” said Kucia. “Then, one day, I saw that ax throwing had started growing popular in 15 countries and 100 cities. I looked to my girlfriend and told her ‘This is going to be big. I have to get in on it.’ I created Litchfield County Axe House in February and so far we have had more than 1,000 people throw.”

“Central Connecticut is getting to be pretty familiar with it,” said Kucia. “We eventually want to start setting up leagues.”

Kucia said that he has taken the fully collapsible range to area fairs, making his debut at the Goshen Stampede, completing the range halfway through the event. He then appeared at fairs in Lebanon, Terryville, Hebron and, most recently, the Berlin Fair.

“People definitely get interested, especially in the more suburban areas,” he said. “There 200 to 225 people throwing at the Berlin Fair and in Hebron we had 400 to 500 people.”

Before people step into the ax throwing range, they sign a waiver. The range, set up in the back of a trailer bed has two large wooden targets and a safety net around it. People throw from 12 feet away. Kucia and his assistants will guide participants on how to properly throw the ax, with one or two hands, explaining that it must complete a head over handle rotation in the air in order to hit the target. He coaches them on how their arms should be positioned, how far to step, when to release and other critical skills to developing a good throwing form.

Joe Pisko participated in the ax throwing behind Firefly Hollow Monday. After a couple of tries, he quickly got the hang of it, landing hit after hit on the target and eventually scoring a bull’s eye.

“I felt like a newborn child,” said Pisko after scoring the perfect hit.

When Litchfield County Axe House appeared at area fairs, he said that he also had a version of the sport which children could participate in with parental supervision. Children would be throwing plywood axes at targets made from foam pool noodles.

People can connect with Litchfield County Axe House on Facebook and Instagram or by calling Kucia at 860-299-5619.