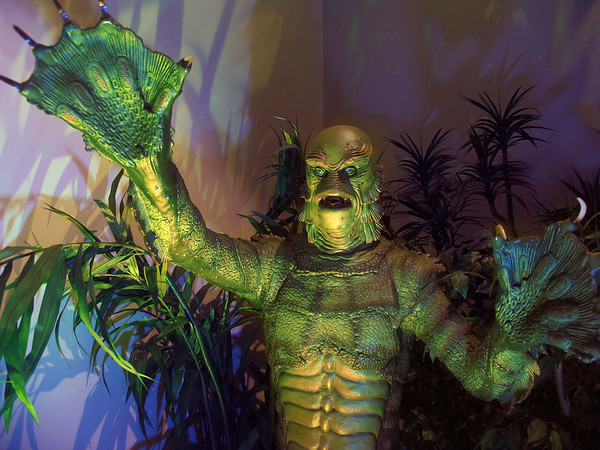 Cortlandt Hull's figure of The Creature from the Black Lagoon featured in The Witch's Dungeon. -Photo submitted by Cortlandt Hull Buy this photo

Cortlandt Hull's figure of Lon Chaney Jr. as The Wolfman featured in The Witch's Dungeon. -Photo submitted by Cortlandt Hull Buy this photo 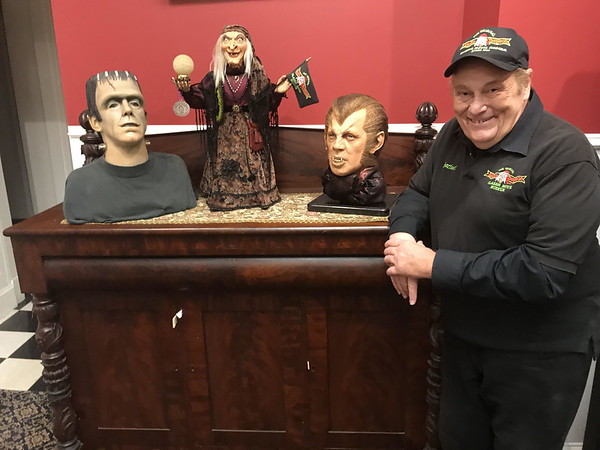 Brian Johnson Staff Cortlandt Hull, owner of the Witch's Dungeon Classic Movie Museum with a bust of Fred Gwynne as Herman Munster, a figure of Zenobia the Gypsy Witch , mascot of the Witch's Dungeon, and Hull's great-uncle Henry Hull as Wilfred Glendon in The Werewolf of London. Buy this photo

Cortlandt Hull's figure of Boris Karloff as The Frankenstein Monster featured in The Witch's Dungeon. -Photo submitted by Cortlandt Hull Buy this photo

"Spot" the pet of The Munsters will be featured on The Witch's Dungeon's parade float at this year's Mum Parade. -Photo submitted by Cortlandt Hull Buy this photo

BRISTOL - The Munsters are coming to Bristol for Sunday‚Äôs Mum Parade in a float for the Witch‚Äôs Dungeon Classic Movie Museum, which will open for its 53rd season Oct. 4 through Nov. 3 at the Bristol Historical Society.

The 58th annual Mum Parade will start at 1:30 p.m. Sunday. The Witch‚Äôs Dungeon‚Äôs float will feature actors portraying Herman Munster, Lily Munster, Eddie Munster, Grandpa Munster and Marilyn Munster and it will also include a giant re-creation of the pet dinosaur/dragon ‚ÄúSpot.‚Äù One of the museum‚Äôs tour guides/ghost hosts, Farnsworth the Butler, portrayed by Rob Lansley, will stand in a graveyard with the grim reaper.

‚ÄúIn The Munsters, the head for Spot was a re-creation of a dinosaur head previously used in ‚ÄòThe Land Unknown,‚Äô‚Äù said Hull. ‚ÄúBoth were done at Universal. It was cast in metal because it breathed fire. Our float won‚Äôt be doing that. The comedy of The Munsters is timeless, which is why we thought it would be fun to do for The Mum Parade. I think the kids will love it.‚Äù

The Witch‚Äôs Dungeon, when it opens for the season, will offer a guided wax museum style tours with life-sized horror and sci-fi figures, movie props, memorabilia and film screenings. People can visit the museum from 7 to 10 p.m. at 98 Summer St.

‚ÄúCome early so you can watch movies shown on real film with our 35 millimeter projector until we close at 10,‚Äù said Hull.

At the Witch‚Äôs Dungeon, Farnsworth the Butler along with Carmilla Karnstein, played by Jodi Dickson, will guide visitors on a tour of the museum and educate them about the characters depicted. Hull‚Äôs life-sized figures include Boris Karloff as Dracula, Boris Karloff as The Frankenstien Monster, Vincent Price as Dr. Phibes and many more.

Visitors will also be able to look at numerous movie props from classic horror and science fiction films. New this year will be a bust of Fred Gwynne as Herman Munster and an original face appliance used to create the boar-like beast from George C. Scott‚Äôs Beauty and the Beast. Hull will also have a figure of Zenobia the Gypsy Witch, the Witch‚Äôs Dungeon‚Äôs mascot, originally gifted to the late June Foray, who voiced her along with such famous characters as Witch Hazel and Granny from Looney Tunes. After Foray‚Äôs death in 2017, the family decided that the figure should be returned to Hull for use in the Witch‚Äôs Dungeon.

There will also be two special guests this year.

Bill Diamond, who designed the sets and lighting for The Witch‚Äôs Dungeon and also lent his talents with puppetry to Gremlins, Fraggle Rock, Sesame Street, The Muppets and The Dark Crystal, will be at the museum on Oct. 11. He will be bringing with him one of the evil Gremlins, which Hull said stands at just over two feet tall.

‚ÄúThe detail on it is just incredible,‚Äù said Hull.

Ann Robinson, who starred in the 1953 version of War of the Worlds, will also be paying a visit on Oct. 26.

‚ÄúI‚Äôve known Ann for a while,‚Äù said Hull. ‚ÄúI met her at conventions and she is a very sweet lady.‚Äù

Hull said that last year the Witch‚Äôs Dungeon saw guests from 44 states and 28 countries. He noted that he receives a lot of support from fans of MeTV horror host Svengoolie and that he will take pictures with visitors wearing a Svengoolie shirt.

‚ÄúIt‚Äôs very rewarding to see all the people that come to see us,‚Äù said Hull. ‚ÄúI‚Äôve noticed that more younger people, in their late teens through early 30s, who used to just like blood and gore, are coming to appreciate the actors, the makeup and the artistry of the classic films. As Vincent Price used to say, classic horror films are really overblown fairy tales; they are fun fantasy films, not slashers.‚Äù

Admission is $6 and popcorn and soda will also be available. Proceeds will be split between The Witch‚Äôs Dungeon Classic Movie Museum and the Bristol Historical Society. Children must be accompanied by an adult.