Bristol food pantries and organizations try to keep up with demand, one year after soup kitchen closure 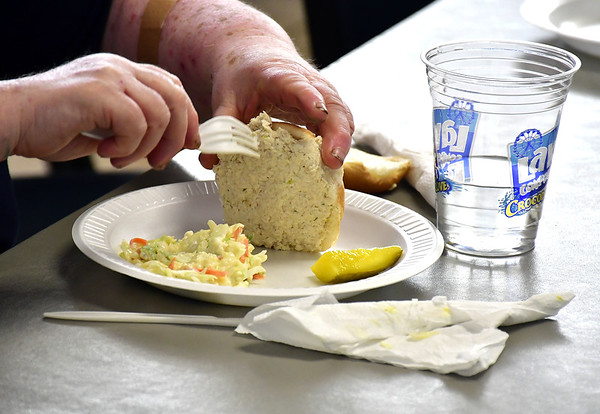 8//8/2019 Mike Orazzi | Staff Linda Donovan and Gary Middleton while at the Meals for Neighbors program at Zion Evangelical Lutheran Church in Bristol. Buy this photo

BRISTOL - It has been a year since one of Bristol‚Äôs three soup kitchens closed, and other local social service agencies have been doing their best to pick up the slack, mostly by giving out food that clients can take home to tide them over the weekend.

Then CFC Pastor Dean Desjardins said he had to make some hard financial decisions, which resulted in closing Storehouse on Aug. 17, 2018, after more than 25 years. ‚ÄúWe‚Äôre a little church and we have a lot of expenses,‚Äù he said then.

He said Storehouse would typically serve some 50 meals on a Friday, and about 100 on Saturday and Sunday, while the food pantry was serving on average 90 or 100 families a week.

At Zion Lutheran‚Äôs Meals For Neighbors program on Judd Street, ‚Äúwe have been averaging between 50 to 80 meals per night,‚Äù said Van Monak Chhun, MFN executive director.

That has been consistent from last year, but the increase has been to people needing to visit the food pantry, which is open more often and now has evening hours, Chhun said.

‚ÄúOn average, we used to be able to accommodate maybe eight visitors per pantry day, now we‚Äôre seeing between 15 to 20 visitors coming on each pantry day,‚Äù she said. ‚ÄúWe have also increased the food that we give out. On the hot dinner nights, Monday through Thursday, we put small items out that diners can take with them on the way home, whether it‚Äôs yogurt or hard boiled eggs or macaroni and cheese.‚Äù

‚ÄúThe idea is because that will last them through the three days when we‚Äôre not serving a hot meal,‚Äù she added.

MFN, like Salvation Army does and Storehouse did, gets its food from Foodshare, which is the regional food bank for Hartford and Tolland counties, and as well as donations from local companies, the U.S. Post Office food drive, local agencies, individuals, etc.

Chhun said MFN is very collaborative with other organizations in Bristol.

‚ÄúSo if I have a surplus of something, I say ‚Äòhey, do you need this?‚Äô and vice versa. For example, the Salvation Army was the recipient of the coat drive by Best Cleaners, but they would call us and say ‚Äòdo you need coats?‚Äô Our answer is always ‚Äòyes, absolutely!‚Äô‚Äù

The mayor has made it a key priority to further enhance that collaboration and to have some strategic planning ‚Äúso there‚Äôs less and less duplication of services, and more allocation of services,‚Äù he said.

The Salvation Army in Bristol is ‚Äúfacing a major deficit this year,‚Äù said Capt. Shareena Echavarria.

That‚Äôs not entirely due to Storehouse closing. Echavarria said the Salvation Army‚Äôs annual major fundraiser - the Christmas kettles outside stores - usually pulls in around $80,000. This past Christmas season, they only raised about $52,000, due to some complication with the nationwide contracts with grocery stores.

‚ÄúSo when you factor that in with the definite influx of new clients that we‚Äôre seeing, we are really struggling,‚Äù she said.

‚ÄúWe have gone from an average of 40 to 70 meals on a slow day in years past, to averaging 75 to 125 meals a day. We‚Äôre seeing increases in our food pantry requests,‚Äù she said. ‚ÄúSo it has been really hard. It‚Äôs not just our soup kitchen, those families seek us for other services. Our volunteers are stretched to the max because they‚Äôre washing pots and pans for a heavier workload than usual.‚Äù

‚ÄúWe definitely saw an influx last year at Christmas time, and also the year prior when Hurricane Maria hit Puerto Rico. We saw our Spanish families increase in size here in Bristol, a household of four jumped to a household of eight, and our pantry was trying to meet that need,‚Äù she said.

Echavarria said Salvation Army volunteers are also packaging snacks, juice and bottled water into bags the homeless can take to get them through the weekend, with a grant from the Main Street Community Foundation.

The mayor and the United Way of West Central Connecticut have been helpful in guiding Salvation Army to more grants, Echavarria said. ‚ÄúBut if we are unable to raise more funds we are looking at possibly closing our soup kitchen a couple days of the week in order to save on operational costs.‚Äù

‚ÄúWe want to raise awareness so we invite Bristol residents who are interested, not just to send a check, but to come in to see the family that‚Äôs been created downstairs here,‚Äù she said. ‚ÄúThe music is playing, there‚Äôs hugs being given. It‚Äôs a place of hope and refuge. We just want others to see why we‚Äôre ringing those bells and why we really need Bristol to help us help others.‚Äù

Brian‚Äôs Angels is getting about the same number of people coming in, but it‚Äôs busier on the days when Storehouse used to be open, said Pat Stebbins, director.

The homeless outreach center was housed at St. Vincent de Paul on Jacobs St. for three years but is in the process of moving to Prospect United Methodist Church on Summer Street.

‚ÄúActually, we like to call it a snack,‚Äù Stebbins said. ‚ÄúUsually it‚Äôs just sandwiches and potato chips, not a hot meal, unless we buy a pizza or something. However, since the soup kitchen closed, on Fridays, Saturdays, and Sundays now we serve until 4 p.m., so that people don‚Äôt end up going hungry. Monday through Thursday we still serve 1:30 to 2:30.‚Äù

She said Brian‚Äôs Angels serves an average of 30 to 35 people a day. ‚ÄúAt the beginning of the month sometimes it‚Äôs no more than 20 because they have their food stamps and their checks then. By the end of the month we could be serving up to 50 people, so it varies greatly,‚Äù she added.

Zoppo-Sassu said the city is supporting the soup kitchens to make sure there isn‚Äôt a gap in their services. She cited a recent example when MFN learned its insurance company was requiring them to install a $20,000 new kitchen stove hood.

By drawing on the city‚Äôs Community Development Block Grants, the City Council was able to come up with the money for the hood, she said, ‚Äúbecause we can‚Äôt afford another non-profit to not be serving meals.‚Äù

For information on donating to MFN or volunteering, visit http://bristolzion.org/outreach/, find them on Facebook, or call the church office at 860-589-7744.

For information on donating to the Salvation Army or volunteering, email shareena.echavarria@use.salvationarmy.org or call 860-583-4651.

For information on donating to Brian‚Äôs Angels or volunteering, visit https://briansangels.org/ or find them on Facebook.