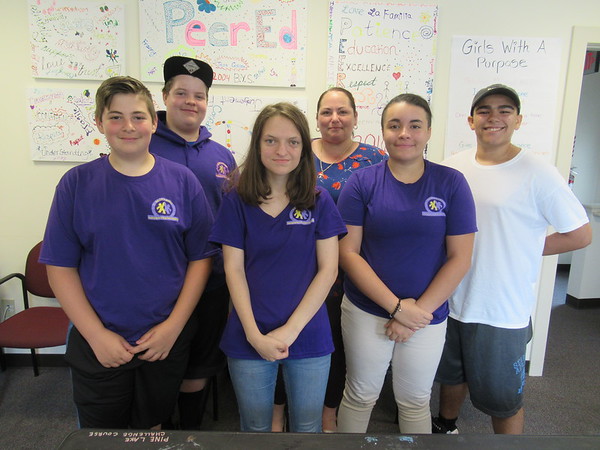 BRISTOL - For a group of Bristol young people who attended the Youth to Youth Conference last weekend, it was an experience in building their confidence to be positive role models for their peers.

Seven local young people from B.E.S.T.-4-Bristol, joined up with groups from Southington and Naugatuck for the bus trip to the four-day retreat at Bryant University in Rhode Island, where they met with hundreds of their peers from around the country.

B.E.S.T.-4-Bristol, which stands for Bristol Eliminating Substance Use Together, works to reduce youth substance use in the city, with grant funding through the federal Drug Free Communities program.

They have been meeting weekly, working with prevention coordinator Christina Sanchez and outreach support worker Stephen Bynum, from Bristol Youth & Community Services, who accompanied them on the trip.

The goal of the conference was to give young people confidence in their ability to positively influence others in their drug-free beliefs and other healthy behaviors. Workshops and activities from 6 a.m. to 11 p.m. each day focused on leadership training, substance abuse prevention, mental health promotion, violence and bullying prevention, etc.

“I found a lot of new skills in myself,” said Angel. “I found a support group I can always fall back on. You can get really motivated by the stories you hear from other people.”

“As I head into the new school year it gives me the confidence to be able to expand my activities to things outside of school,” he said. “I’m a Bristol Police Explorer, a vice president of the Outdoors Club that’s newly started at my school. I really found the confidence to know no matter what my plan is I can act on it. Here at B.E.S.T.-4-Bristol we’re going to start planning events to show the community how to have drug-free fun.”

Gabriel said one of his school counselors got him interested in joining the group, because he was already concerned about substance abuse he saw going on in his family and with his friends, behaviors including vaping and underage drinking.

“I figured the more I learned about it, it would help me be able to change that,” he said. “It kind of bothers me that vaping is becoming such a big thing in our school.”

Sanchez noted that vaping is so new there hasn’t been a lot of research on its potentially harmful effects, but elsewhere in the country there have been news stories about teenagers ending up in the emergency room for severe lung disease from vaping.

Molly said their group came away from the conference with some ideas for projects, like creating YouTube videos. “We would talk about normal everyday things young people are interested in and maybe put in an anti-drug message, so people wouldn’t be like - ‘all they ever talk about is don’t do drugs!’” she said.

She also wants to bring some of the conference’s motivational speakers to Bristol’s high schools, such as comedian Kevin Wanzer, and Jesse LeBeau, who spoke about overcoming his short stature to become a successful college basketball player.

Koda said she really connected with the speakers, because it helps to hear from adults who had experience with the same stressors that young people have, like ADHD

“People have to turn to something when they’re stressed,” she said. “For me, I have mild ADHD and I play football and I used to play softball for 10 years. A lot of kids also have anger issues and they need things to let it all out.”

Molly said they would like to bring a program called Hidden in Plain Sight back to town.

It’s geared for parents, to walk them through a mock bedroom with contraband hidden in it, to give them an idea of what to watch out for, Sanchez explained. “We are bringing it to three of our schools this year, Chippens Hill Middle School and the two high schools. Chippens did it last year and had great success with it.”

Kaidyn likes the idea of Fifth Quarter, a program to provide teenagers with a place to hang out to dance, play basketball, eat pizza, and have fun after Friday night football games, as an alternative to drinking and partying.

“We’re happy to provide this experience to our youth, and put Bristol on the map that we’re taking a stance against youth substance abuse and there are other outlets and ways to have fun,” Sanchez said.

She said the conference participants also liked seeing a college campus, staying in the dorms, and eating in the dining halls. “So they come away saying ‘hey, maybe I could see myself at college.’”