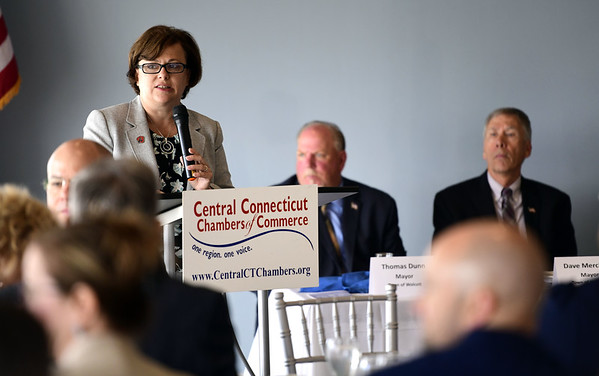 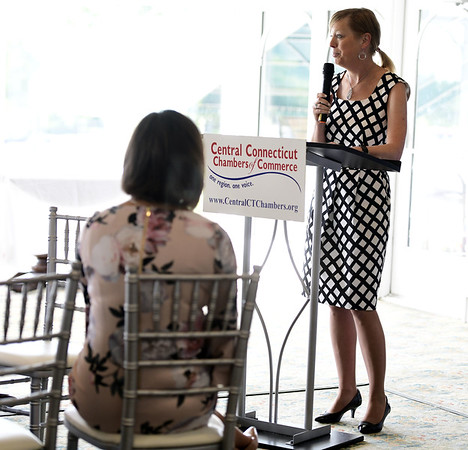 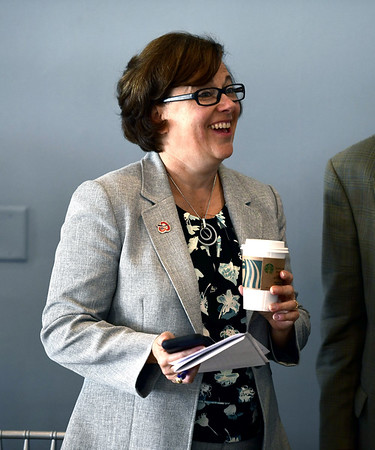 BRISTOL – Leaders of local communities discussed development, economic expansion and goals for growth at The Central Connecticut Chambers of Commerce’s “State of the City and Towns Breakfast.”

Cindy Bombard, president and CEO of the Central CT Chambers of Commerce, welcomed the guests. She said it was one of her favorite events that the Chamber organizes each year.

“I love to hear from our local municipal leaders,” she said. “I have great respect for all of you; it’s not easy to run a municipality these days.”

Kurt Barwis, president and CEO of Bristol Health and co-chair of the Chamber’s Legislative Action Committee, introduced the guests and invited them each to come up to the podium and give an update on recent developments in their communities.

Zoppo-Sassu was the first one up, and said that Bristol has a “healthy outlook” for the future. She said she strives to balance quality services with not excessively taxing businesses and residents and “continually evaluates” departments and programs to establish “best practices.” She said that the city has re-organized departments, eliminated nine positions and is “doing more with less.”

“Government can’t be run like a business,” she argued. “Our motive is not profit; it’s about the people.”

Zoppo-Sassu shared a recent success story, that of Stanley Cardona, as an example of the city’s effective support system. Cardona came to the city as a homeless youth but earned a full scholarship to Trinity College and was recently named the 2019 Youth of the Year by the Bristol Boys & Girls Club.

Zoppo-Sassu also pointed out that Bristol has strengthened its relationship with labor unions and the Board of Education. Developments she highlighted in Bristol include the Memorial Boulevard School renovation project, the opening of the new Bristol Health building downtown and the growing interest for downtown parcels.

When it was Merchant’s turn to speak, he compared running Plymouth to running a small “Mom and Pop shop.” He also stated that the budget for this year passed with a “very minimal” tax increase.

One of his bigger points was advocating for shared services with other communities.

“We do a lot of sharing of services with Thomaston next door,” he said. “We’re still trying to get Ellen (Zoppo-Sassu) to adopt us. Bristol can probably do a lot more for us than we can for Bristol, but I expect we’ll see some shared services by the end of the year.”

Merchant noted several recent developments in Plymouth, including the town’s new fire station, which he said was one of his “pet projects,” upgrades to the middle school and three new businesses interested in coming to the industrial park.

“In a couple years, our park will probably be at capacity,” he said.

Merchant said that a project to widen Route 6 would begin next year, which will result in additional on-street parking.

He also mentioned the town’s sale of the former Main Street School to EdAdvance, which plans to renovate it into a regional center for special education students by the end of the year.

Over in Plainville they’re celebrating their 150th Anniversary.

When Tompkins got up to speak, she stated that the town had received a $3.8 million state grant to close the Plainville gap in the Farmington Canal Heritage Trail.

“This represents 20% of the funding needed; we’re waiting on a Federal grant which would cover the remaining 80%,” said Tompkins. “This is a significant step. The Department of Transportation will be designing the trail with significant input from the Town Council and town staff.”

Tompkins estimated the bike trail would be completed by 2023.

She also brought up the Wheeler School renovation project. Tompkins said that it is proceeding under budget and is on schedule to be completed by next year.

An update was also given for the Water Pollution Control treatment plant upgrades. Tompkins said that they are 60% complete and running ahead of schedule.

Plainville is also in the process of upgrading to a fiber network to allow a more secure connection between town and school buildings.