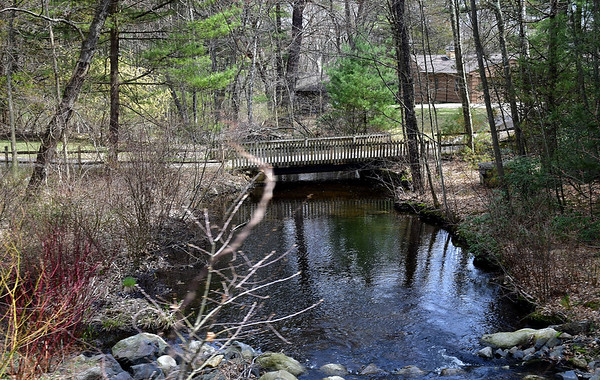 Mike Orazzi | Staff Burlington and Bristol are petitioning the federal government to change the name of Negro Hill Brook off Route 69. Buy this photo
Published on Wednesday, 15 May 2019 20:24
Written by SUSAN CORICA

BRISTOL - The name of a local brook will be changed to honor, not the extinct passenger pigeon as previously proposed, but an African American family that lived in the area.

In April, the City Council voted to rename Negro Hill Brook in the north end Pigeon Hill Brook, in cooperation with the Town of Burlington. Tuesday night the council agreed to adopt the name Freeman’s Hill Brook instead.

The renaming idea originated when the two municipalities began cooperating with the Environmental Learning Centers of Connecticut to secure an open space state grant to acquire land off Shrub Road by ELCC’s Barnes Nature Center.

The brook, which originates near Gilbert Lane in Burlington and flows southeast into Bristol, was originally named Negro Hill decades ago. It flows through Seymour Park and passes Pigeon Hill until it runs into Copper Mine Brook. Pigeon Hill is part of the 70-acre nature center, and was once a major habitat for thousands of passenger pigeons.

Renaming a body of water requires approval from the U.S. Board on Geographic Names, which is part of the U.S. Department of the Interior. Both Bristol and Burlington agreed to endorse a letter to the board recommending the Pigeon Hill Brook name.

Since then, Mayor Ellen Zoppo-Sassu said, both municipalities were contacted by Burlington resident Tom Rubino, who had done research on the Freeman family - African Americans who were area landowners in the 18th and early 19th centuries. Rubino proposed the name Freeman’s Hill Brook, which has been endorsed by Warren Perry, anthropology professor at Central Connecticut State University.

“The Freemans were among the few African Americans who owned land in 18th and 19th century Connecticut,” Perry said. “Their relatively small landholdings represent a massive achievement for persons whose oppression was sanctioned by law, despite their nominal ‘freedom.’”

“Pigeon Hill, while not as offensive as the original name, did not aptly describe what they believe actually happened in this area,” Zoppo-Sassu said. “They thought that going with Freeman’s was a better choice that didn’t actually obscure the history of the area, or the original name.”

She said she would draft a letter with City Clerk Therese Pac to the geographic names board explaining the change.

In his letter endorsing the name, Perry referred to CCSU’s recent dedication of its Social Sciences Hall in honor of Ebenezer Don Carlos Bassett, the first African American student to graduate from CCSU’s parent institution back in 1853, who went on to a distinguished career.

“This recognition holds parallels to Mr. Rubino’s proposal,” Perry wrote. “The naming of places carries more weight than mere words on a building or signpost. Names are acknowledgements of existence, of history, and of the significance of location and community, especially for those who have lived under oppression.”

“In recent decades, Connecticut has begun to face the historical truth of its connection and culpability for the evils of the trade and enslavement of African people, and also to recognize and celebrate the strength and agency of Africans and African descendants who lived, labored and died in and for our state and nation,” Perry wrote.