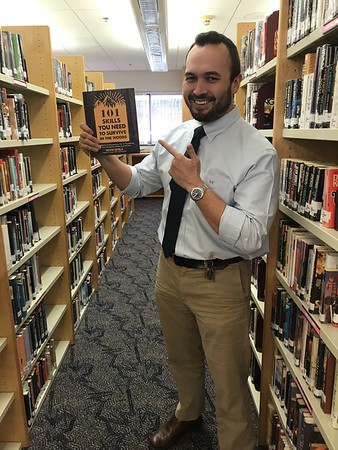 Kayla Murphy | Staff A collection of Estela's published works in a variety of survival magazines. Buy this photo

Estela will be releasing a new survival book called ā101 Skills You Need to Survive in the Woods: The Most Effective Wilderness Know-How on Fire-Making, Knife Work, Navigation, Shelter, Food and Moreā on April 16. The book will be available for purchase at Barnes and Noble and Amazon.

In his book, Estela focuses on 10 different wilderness needs such as first aid, food and gathering, navigation and fire skills. Each topic contains 10 different skills one will need in order to survive in the wild. However, Estela says the most important section of the book is the introductory.

āThe introductory focuses on the survival mindset. You have to be aware and prepared. You have to be willing to survive. Once you accomplish those three things, youāre ready to learn to survive,ā explained Estela.

While Estela said he enjoyed writing this book, he said that the ā101 Skillsā is no way complete.

Ever since he was little, Estela loved wildlife. His father taught him survival skills, as well as his mentors from the Indian Rock Nature Preserve. As he got older, Estela worked on perfecting his bush craft, martial arts and survival skills. He wrote about his adventures and was able to get some of his writings published in magazines such as Survivorās Edge, American Frontiersman and RECOIL.

One of his more recent trips was an adventure through South Africa.

āIt was an amazing trip. I was able to hunt with professional hunters. These hunters provide over 100 pounds of meat a week to schools in need. Without these hunters, the children in these schools wonāt receive any protein in their diet,ā said Estela.

Estela said it has been a humbling experience to have written his first book and he looks forward to writing other books, such as about his time in South Africa.

āA good friend of mine, Craig Caudill, introduced me to his publisher. His publisher asked about my writing and I gave him a sample of the table of contents. We signed a contract on April 1, 2018, and on June 30, I had finished writing the book. Over the fall, it has been in the editing process,ā Estela said.

Prominent figures who have an interest in survival have left positive comments after reviewing an edited sample of Estelaās book. One of the reviews was from former Navy SEAL and Discovery Channel host Joel Lambert.

Lambert said, āI have a whole shelf of books on survival, tracking, bushcraft and booby traps, some military field manuals from my time in the SEAL teams, some written by former operators and some from the civilian sector. What is lacking in most of them, however, is what I would consider the most important aspect of all, the underlying foundation of these skill sets, the āmake-or-breakā quality, if you will. That elusive elixir is mind-set, and Kevinās book (as well as Kevin himself) has that in spades.ā

Modest over the praise heās been receiving for his book, Estela said he just wants his readers to embrace the strength he knows they have.

āI want to encourage people to be strong and to have power over their destiny. I hope my readers are able to apply the skills from this book and see improvement in themselves. I hope they see the world differently,ā said Estela.