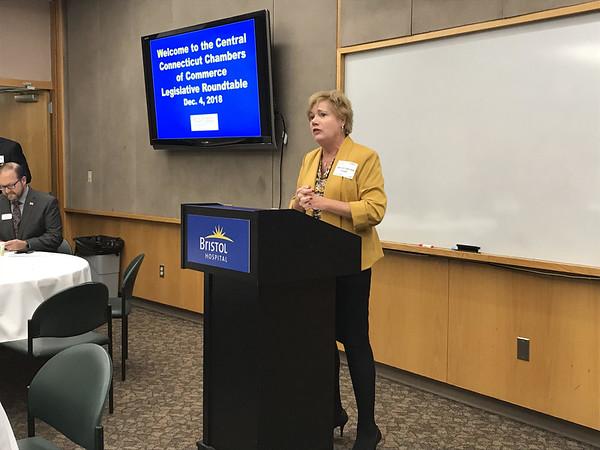 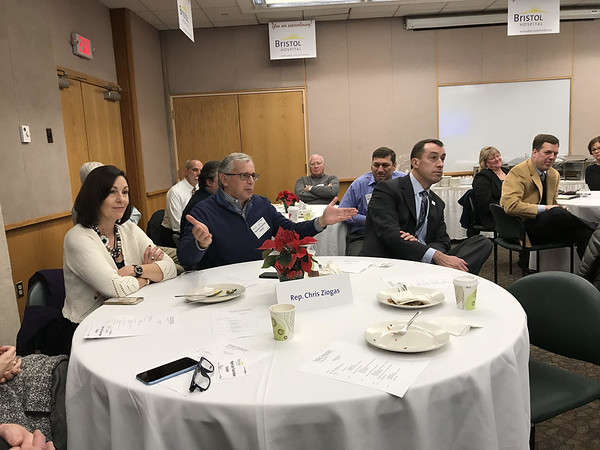 BRISTOL – Local legislators discussed a range of issues including minimum wage and bipartisan cooperation during the Capitol’s next session Tuesday, at the Central Connecticut Chambers of Commerce’s Legislative Roundtable.

Paul Lavoie, chair of the Regional Legislative Action Committee, said that this event was “an opportunity for the business community to interact with legislators.” He thanked all of those who participated.

Cindy Bombard, president and CEO of the Central CT Chambers of Commerce, and Kurt Barwis, chair of the Bristol Chamber Legislative Committee, also welcomed the guests.

Bombard began the discussion by asking the legislators what they thought about increasing the minimum wage to $15. Betts said that the chances of such an increase passing were high. He encouraged small business owners to go to the capitol and educate legislators about the impact.

“The last time a minimum wage increase was passed, there were a lot less cashiers and a lot more self-serve stations at Stop & Shop,” said Betts. “Robots will be taking more and more jobs and high school and college students won’t be able to earn money during the summer. It inhibits employers’ ability to hire people. Minimum wage was never meant to be a living wage. You really have to be paid something like $25 an hour to live in Connecticut.”

Martin agreed with Betts that a higher minimum wage will lead to more automation.

Demicco also suggested that instead of increasing taxes, legislators may be looking into “broadening the tax base” to make it “more reflective of current times.”

“You may also have to brace yourself for a $2 cup of coffee at Dunkin Donuts costing $5,” said Lavoie, who suggested that perhaps legislators could establish a “training wage” to pay employees under 21 less money.

Lavoie later asked if he felt that Governor-elect Ned Lamont was open to discussions or if it was “my way or the highway.”

Demicco said he felt Lamont was “open to talking to everyone” and “wanted to hear what everyone has to say.”

Pavalock-D’Amato said that Erin Stewart being a part of the transition team was “a step in the right direction.” The perception, she said, is that he’s “putting his hand out.”

Martin added that the “perception is positive” and that Lamont had met with minority leader Len Fasano “a number of times.”

Ziogas said that this was the “honeymoon period.” He said that “everyone is anticipating and waiting to second guess everyone.”

Betts said that Lamont is “sending the right signals” that he is looking for long-term solutions. However, he wants to see what happens when the budget season begins.

“Throughout the country, Connecticut is looked upon very poorly,” he said. “People are leaving the state and moving to Florida not just for the warm weather but to avoid paying taxes. I love Connecticut, but if you don’t present a good, long-term plan that trajectory won’t change.”

Bombard said that legislators should “put Republican and Democrat aside” and “do what’s best for the state.”