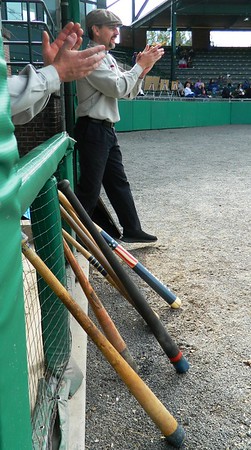 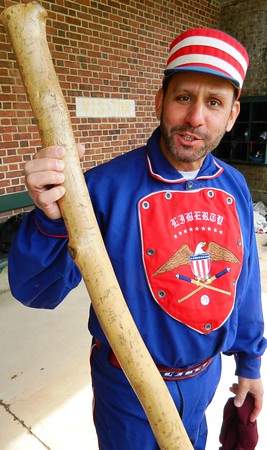 BRISTOL - Visitors to Muzzy Field Sunday discovered a marked difference between today‚Äôs baseball and the game played in 1864: etiquette.

Notable vintage baseball players from across the Northeast congregated at the park for the first-ever Historic Baseball All-Star event, a demonstration and commemoration planned by the Bristol Historical Society. The occasion was one for vintage baseball fans, like those who laced up their authentic 19th century shoes before stepping onto the field.

The first of two games was played by 1864 rules, beginning with a swift underhand pitch made 45 feet away from home plate. The strike zone was much larger and hitters minded their steps, since overrunning first base was considered an out. If the ball bounced and was caught before the second bounce, the batter was out.

The game that followed featured 1865 baseball, played the same as the prior year with the exception of one rule.

‚ÄúIn the field of play you have to catch the ball in the air, except for foul balls, they can bounce,‚Äù explained Jeff ‚ÄúPine Tar‚Äù Kornhaas, a player and expert on 19th century ball.

He stepped to the mound gripping a handmade bat crafted from a piece of driftwood. Suited up in his home team‚Äôs Liberty Baseball uniform, Kornhaas shared his love of the vintage game with curious visitors in between innings.

The most notable difference from today‚Äôs ball, he explained, is the sense of solidarity shared by players.

‚ÄúThis game brings back unity. I find the group of guys here today to be very gentlemanly. It goes back to a time when America was seemingly more pulled together. Baseball was a gathering that offered a real sense of community.‚Äù

Like many of the players, it was his first visit to Muzzy Field.

Players of opposing teams tipped their hats to each other to compliment good catches and solid hits - field interaction that is largely unheard of these days.

‚ÄúThe camaraderie here between ballists is incredible,‚Äù said Greg Rodenbaugh, a player from Rising Sun, Maryland. ‚ÄúVintage ball is more about the game than it is self-promoting. You won‚Äôt see any fist pumping. We play baseball because we like to play.‚Äù

‚ÄúThese are the guys who really love the game,‚Äù Kornhaas said, looking around the dugout.

Melissa Frydlo plays for three local teams but a torn knee kept her off the field Sunday. She was just as happy to be in the stands.

Just under 50 people came to watch, less of a turnout than organizers had hoped.

‚ÄúI thought it would be kind of neat to see how they used to play baseball,‚Äù said Kathy Lauzon, of Terryville.

She sat beside her mother, Doreen Lauzon, who reminisced about the old days in Bristol.

‚ÄúI used to come here when I was a kid,‚Äù the elder Lauzon said. ‚ÄúI lived right over there, on Peck Lane.‚Äù

‚ÄúThese are players I‚Äôve met at different games but seeing them all together on one field is really cool,‚Äù he said.

A special guest was Mystic resident Marjory Adams, the great-granddaughter of baseball founding father Daniel ‚ÄúDoc‚Äù Lucius. Lucius created the shortstop position and ruled that bases should be 90 feet apart. He was also the first umpire to use the nonswinging strike out rule in 1858. Adams is leading an effort to have him inducted into the Baseball Hall of Fame.

‚ÄúA lot of the players here today are supporting my efforts,‚Äù she said.

It was also her first visit to the park. She was excited to discover Babe Ruth played there.