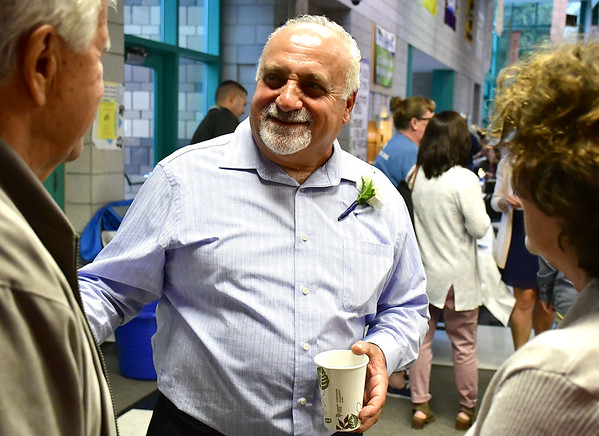 BRISTOL - Chippens Hill Middle School celebrated its silver anniversary this week with a salute to staff members who have worked at the school for all of its 25 years so far and to former students who now teach there.

“In the past quarter-century so much has changed since we first opened the doors in 1993,” said Assistant Principal Mariliz Fitzpatrick.

In that time different forms of instruction have evolved, thanks to advances in digital technology. Through all the changes, the building itself has held up well over the years, thanks to “the work ethic, the passion, the commitment” of head custodian John Mastroianni, Fitzpatrick said.

“John has serviced the Chippens Hill community since the opening of the school in 1993,” she said, “He has contributed to student learning by leading his staff in creating a safe, clean and healthy environment.”

There was a musical interval as students Luke Ricciardone and Giatyalis Rosario sang “A Million Dreams” from the movie “The Greatest Showman.” Fitzpatrick then honored three teachers for their quarter century of service to the school: Audra Larson, wellness teacher; Robert McConnell, tech education teacher; and Angela Lomaglio, music teacher.

Among Larson’s many roles and accomplishments over the years, she was instrumental in the school being recognized as the state middle school of the year in 2011, Fitzpatrick noted.

“Mrs. Lomaglio’s passion for music education is recognized by administrators, colleagues, students and parents here at CHMS and around the city,” Fitzpatrick said. Her Harmonizers choral group has performed at many Connecticut Music Education Association events. She inspired a number of her former students to further their education in music and one of them, Theresa Degan, was recently hired as a music teacher at Northeast Middle School.

McConnell’s passion for teaching technology is evident in how he is the first to arrive at school at 6 a.m. daily, and he is always willing to help his colleagues learn about computers even before the official training is presented, Fitzpatrick said. “Mr. McConnell is a risk taker and is always researching new ideas and projects for his students.”

Photos of the veteran teachers were added to a new bulletin board in the school lobby highlighting former Chippens Hill administrators from 1993 to the present.

Fitzpatrick herself has spent 18 years of her 22 years so far in the school district at Chippens Hill. She taught sixth grade math for most of that time and was named dean of students last year, before assuming her current role this year. She went through the Bristol school system but admits “I’m not from Chippens, I went to the Boulevard,” referring to the old Memorial Boulevard Middle School.

In addition to Luke and Giatyalis, other student musical performers at the celebration were Corey Lipscomb, Jillian Kovitch and Matthew Smith.

Fitzpatrick said the school will continue its anniversary celebration throughout 2018-19, with programs such as Chippens CARES, which stands for Cooperating, Accepting differences, Responding easily, Engaging in learning, and Supporting success for all.

Students who meet the expectations of the CARES philosophy get rewarded with raffle tickets, and on the 25th of each month there is a raffle where they can win prizes, she explained.

There are also 25 CARES chips being distributed to staff and students who perform kind acts for others, with the idea that the chips will get passed along with each act, she said.