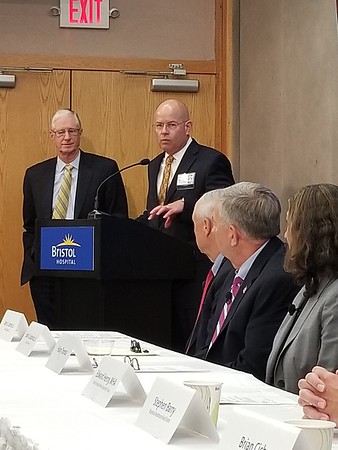 Justin Muszynski | Staff Bristol Hospital President and CEO Kurt Barwis offers his analysis of the state of the hospital at a quarterly forum Tuesday. Buy this photo
Published on Tuesday, 25 September 2018 21:27
Written by JUSTIN MUSZYNSKI

BRISTOL - A year removed from posting a $7.5 million loss, Bristol Hospital expects to be back in the black at the conclusion of this fiscal year, with plans to open its long-awaited outpatient facility in the heart of the city’s downtown area sometime next spring.

“There’s tremendous change and we’re not stopping,” Bristol Hospital President and CEO Kurt Barwis said at one of his quarterly forums where he speaks about the state of the hospital.

Barwis said the hospital, just days away from the end of its current fiscal year, is looking at a $1 million to $2 million bottom-line profit, with its operations budget roughly breaking even.

Hospital officials are looking to draw new doctors to the area, using the three-story, 60,000-square-foot Ambulatory Care Center as an attraction.

Construction crews are in a race against the calendar to get the facility “locked in” so they can work inside during the winter, said Brian Cich, of Florida-based Rendina Healthcare Real Estate, the developer of the project.

Despite heavy rain recently, Cich said, crews are on schedule for a spring finish. Depending on how winter plays out and some other factors, the timetable for completion could be anywhere from the beginning of the season to the end.

“You’re going to start to see the skin on the building,” Cich said of the coming weeks and months.

When asked by Barwis why Rendina decided to go along with developing the project despite knowing of the hospital’s $7.5 million loss, Rendina’s Stephen Barry said “We wanted to stand by you.”

Barry added that Rendina “believed in the vision” that hospital officials had.

“This project was about looking forward,” said Cich. “We saw the vision.”

Cich and Barry added that they never got the impression that the loss the hospital took was something to be concerned about. They said it always felt as though it was a step back to take a leap forward.

“Numbers only tell part of the story,” Barry said.

The Ambulatory Care Center will house a number of sub-specialties, including cardiology, neurology, orthopedics and rheumatology, as well as space for laboratory and physical and occupational therapy services. Hospital officials said it will provide residents of Bristol and surrounding towns with more convenience by being a central location for all their health care needs.

“We’re not stagnant,” said John Lodovico of the Bristol Hospital and Health Care Group. “This hospital is moving forward.”