Children and goats are stars of Open Farm Day

Erica Drzewiecki | Staff David Karimeddini and his daughter Liylah, 7, of Avon, groom a goat at Bradley Mountain Farm Sunday. The Karimeddinis are members of the Apple Valley 4-H Club. Buy this photo 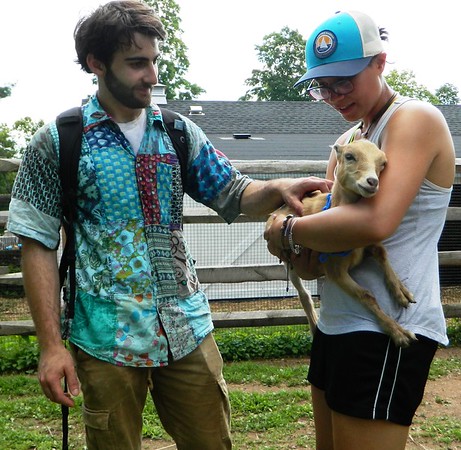 SOUTHINGTON - Ordinary activities seen in the area around Crescent Lake, yoga and hiking, are being made extraordinary with the addition of goats.

The neighboring Bradley Mountain Farm hosts Goat Yoga and Goat Hikes, inviting people to experience both with some of the 25 goats that live on the property.

Several dozen visitors took part in a variety of activities during Open Farm Day Sunday, most of which involved the animals.

The morning began with youths from Southington’s Apple Valley 4-H Club who came to groom goats they’ve been working with over the last year.

There’s Sarah Avery, 9, and her goat partner, Henry, who have developed quite a bond since they met last September.

“It’s been wonderful,” Sarah’s mom, Lori Avery, said, watching her daughter lead Henry back into the enclosure with his brothers and sisters.

Not only has Sarah learned how to trim his hair and clip his hooves, but she’s learned something about people.

“When we first came here, she was petrified to talk to anybody, just very shy,” her mother remembered. “Now she’s really opened up. She’s a different kid.”

4-H members are required to make presentations to the public on their work with animals once each year they take part in the program. This forces them to talk to strangers about what they’ve done.

“The kids have done a lot with the goats this year,” said Annaliese Dadras, who owns Bradley Mountain Farm with her husband, Mat McDonald, and 16-year-old son, Kiyan. “It’s been great for us having the kids here. What I think is really awesome is that their parents come and learn right along with them.”

David and Liylah Karimeddini came from Avon Sunday to spend some time with the goat Liylah is working with.

“She’s seven and this is her first year doing 4-H,” David said. “We have a dog at home, but there’s a lot of knowledge you have to have to care for farm animals.”

Children who come to the farm will be joining Dadras and volunteers at the Hartford County 4-H Fair in a few weeks.

Later on Sunday another group outfitted more than a dozen goats with backpacks and harnesses before venturing onto the green trail around Crescent Lake. Senior goat herder Terri Battaglia led the way.

The group would stop to let the goats snack on pine and sassafras.

Others chose to “Join the Herd” - an experience that put them inside the pen where the goats live and play. Faces lit up as baby goats were placed in their arms by senior goat nannies Traci Wood and Lisa Robinson.

“We were up here for a wedding and hiking around when we found this place,” Mikolajczak said.

Every other Sunday morning at Bradley Mountain Farm, visitors do yoga poses as the goats roam around climbing on them. Laughter and cuddling make these yoga sessions different.

“The goats see the humans as play gyms,” Dadras explained.

Next weekend, people will take Goat Walks around the farm property on Shuttle Meadow Road, which are more leisurely meanders than hikes. The program is set for Friday from 6 to 8 p.m. and Saturday from 3 to 5 p.m.

But there’s more than just goats at this place. There are also chickens, soap-making workshops and birthday parties.

Check out bradleymountainfarm.com for a calendar of activities.