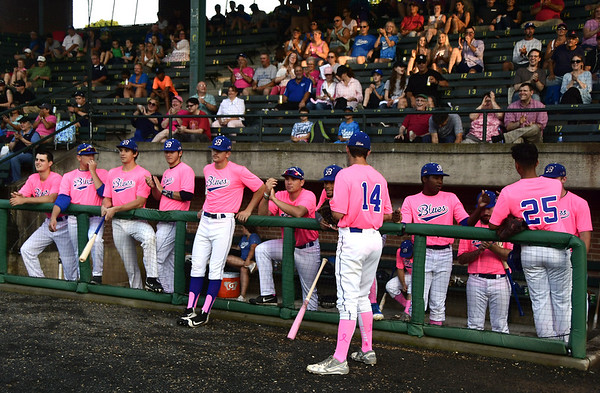 BRISTOL - The stands at Muzzy field were filled with pink jerseys Thursday night as the Bristol Blues, in their last regular season home game, celebrated breast cancer survivors and raised money for a good cause.

“It raises money for (Bristol Hospital’s) Beekley Center (for Breast Health and Wellness), who did my surgery and took care of me,” said Bristol resident Debbie McPhee, who has thrown out the ceremonial first pitch all four years the Blues have hosted this event.

The Blues four years ago offered to do a Pink Night to raise money for the Beekley Center, said Chris Boyle, a Bristol Hospital spokesman. Each year, the night includes an auction of the players’ pink jerseys and bats and a 50/50 raffle. The proceeds from both go to Beekley.

Boyle added that Bristol Hospital has a great relationship with the Blues, as the hospital is the official health provider for the team.

Reflecting on her fight to become cancer free, Bilodeau said “the environment” at Beekley “made it an easier journey for me.”

“I cannot give them enough accolades,” Bilodeau said, adding that her doctor, Sai Varanasi, and her nurse navigator, Kathy Albano, were very helpful and caring.

“Those two people are very special in my life,” Bilodeau said.

The ballgame, in which the Blues took on the Pittsfield Suns, saw a very good turnout, filling many of the Muzzy Field stands. Bilodeau said she believes so many people can relate to the good cause, as everyone knows someone who has been affected by cancer.

Boyle acknowledged that the Beekley center “wouldn’t have been possible without” the Beekley Family Foundation.

“All these success stories wouldn’t have been possible,” Boyle said, adding that the foundation made a $1 million donation in 2013 to help get the breast health center built.

In its first three years, Pink Night has raised more than $4,000 for the Beekley Center. The amount of funds raised Thursday night was not available at press time, as the auction and raffle winners were both done after the game - which had a late start thanks to a storm front that dumped a lot of rain in the hours leading up to the first pitch.

Boyle said the money that is raised is usually celebrated at a check passing event that has not yet been scheduled.