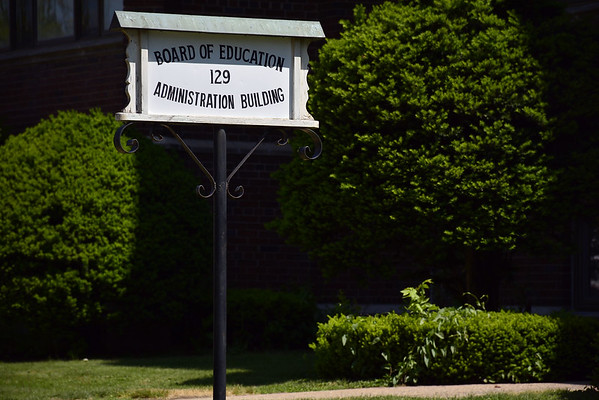 Mike Orazzi | Staff The Bristol Board of Education. Buy this photo
Published on Tuesday, 24 July 2018 21:04
Written by SUSAN CORICA

BRISTOL - The city‚Äôs school system lost out on about $500,000 in state funding last fiscal year after underreporting expenses, but three of Bristol‚Äôs state legislators say they haven‚Äôt yet been contacted by school or city officials to attempt to get the money.

State Rep. Whit Betts said no one has reached out to him on the issue. State Sen. Henri Martin and state Rep. Cara Pavalock-D‚ÄôAmato also have not been cntacted.

Betts serves on the General Assembly‚Äôs appropriations committee, Pavalock-D‚ÄôAmato on the House Education Committee and Martin on the Finance Committee, so Betts said they would be in a position to help.

He noted that when he was first elected to the state legislature about eight years ago he worked with the Bristol delegation to get state money to build Greene-Hills and West Bristol K-8 schools.

‚ÄúThere is a lack of communication on this, and I personally find that very disappointing,‚Äù he said.

Jill Browne, the school district‚Äôs finance manager, had originally reported to the Board of Education in June that there was a problem with Form ED001 filed with the State Department of Education for 2016-17.

Form ED001 is the end-of-year report of all expenditures for public preschool-through-grade-12 education. It is used in calculating state grants and providing statistical information to local, state, and federal decision makers, according to the State Department of Education.

Form ED001 consists of 12 schedules that ‚Äúfeed into each other like dominoes, and often when you get to the end, it doesn‚Äôt balance,‚Äù Browne said. ‚ÄúThe report takes the entire month of August to complete and it must be turned in by the end of the day September 1.‚Äù

She explained that, in January, the district received a letter from the state saying there would be a funding adjustment of $114,209 in Bristol‚Äôs favor, and if there were any changes, the city would be notified in the spring. However, when no notification arrived, and City Comptroller Diane Waldron didn‚Äôt receive all the funding she was expecting, Browne called the Department of Eduction and was told Bristol‚Äôs funding would be reduced by $501,702.

In July, Browne told the board her internal investigation went through ‚Äúevery outplaced student, every purchase order, every invoice and every check that was cut in the 16-17 school year, and we did identify six individual students that had not been reported to the state at all, along with some small errors in tuition and transportation.‚Äù

She said the 2016-17 ED001 was filed while the district‚Äôs Finance Department was undergoing a significant transition, so the district hired outside vendor Time Management Solutions to finish the report.

She said she has since contacted the state and was told that ‚Äúwhile adjustments can be made to students that were reported, we cannot add more students to the report.‚Äù

‚ÄúOf course we‚Äôre not satisfied with that answer so we will keep on pushing and we will contact our state legislators to help us get some special legislation to recoup some of these monies,‚Äù she said.

Meanwhile, Browne and School Superintendent Susan Moreau said they are contacting Time Management Solutions. They said there is a potential for a liability claim against the company but they want to make sure they have all the information first.