Pilot killed in crash of small plane near Robertson Airport 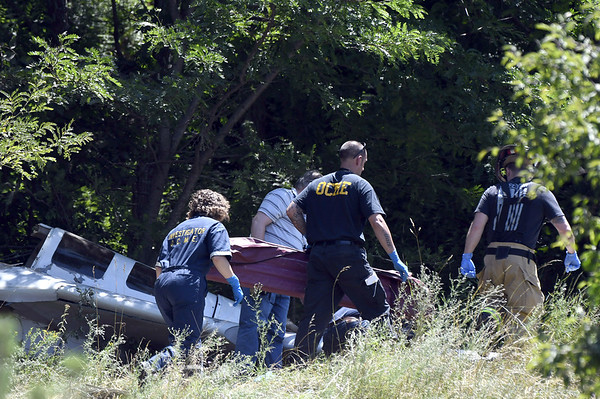 7/12/2018 Mike Orazzi | Staff Investigators on scene of a fatal plane crash in a wooded area near the Robertson Airport in Plainville Thursday morning around 10:30. Members of the National Transportation Safety Board, Plainville Police and fire departments along with the medical examiners office responded to the scene. Buy this photo
Published on Thursday, 12 July 2018 20:34
Written by JUSTIN MUSZYNSKI

PLAINVILLE - One person was killed Thursday morning when he was ejected from a twin-engine airplane after crashing it near Robertson Airport.

The pilot, the sole occupant in the airplane, was identified as 67-year-old Burlington resident Donald Eckberg.

The impact occurred in the town’s landfill that sits just southwest of the airport, behind an apartment complex off of Julie Road. It was just before 10:24 a.m., when authorities received a 911 call about the crash. The first officer on scene had to hop a fence and run to the top of a hill, where the wreckage sat, and call out for any survivors of the crash.

“The officer tried performing life-saving techniques on Eckberg, but he had died on impact,” said police Lt. Nicholas Mullins.

Roger Knapp, who lives in an apartment about 100 yards from where the crash occurred, said he was working at home behind a glass sliding door when he could hear the plane coming.

Knapp, looking through the sliding door, said the plane first appeared as though it were heading directly for his home before it banked left and ended up in a wooded area.

“Oh, it was a huge crash,” Knapp said of the sound.

Mullins said both the Federal Aviation Administration and the National Transportation Safety Board have taken over the investigation. The agencies will determine what caused the crash.

“I know people saw the plane flying low in this area,” Mullins said. “I can’t tell you how exactly the dynamic of the crash occurred - that’s under investigation as we speak.”

When asked if he had any idea what caused the crash, Mullins said, “That would just be speculation at this point.”

On its Twitter page, the NTSB identified the aircraft as a Rutan Defiant - a four-seat, home-built aircraft. Mullins said the aircraft had taken off from Robertson Airport, but he was not sure where it was headed.

This is not the first time a plane has crashed near Robertson Airport. Just last September, an 80-year-old man, flying a single-engine aircraft, crashed into a tree and spun around before the aircraft settled into a parking lot adjacent to the airport. He walked away with minor injuries.

Mullins said there also was a crash several years ago near Northwest Drive.

When asked if authorities had any concern about the number of accidents in the area, Mullins said, “I’d rather not comment on that. Unfortunately, these things do occasionally happen. And we have seen plane crashes in Plainville over the years, due to the fact that we do have an airport in town.”