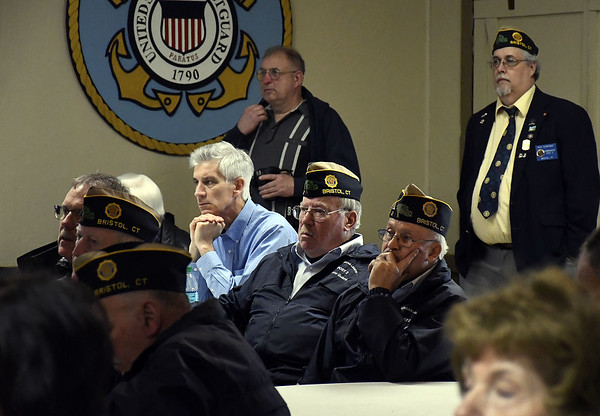 Mike Orazzi | Staff Bristol veterans listen to Terrence J. Finnegan during a program on the 100 year anniversary of the Battle of Seicheprey held at the American Legion Post 2, which is named after the battle. Buy this photo
Published on Thursday, 19 April 2018 21:46
Written by BRIAN M. JOHNSON

BRISTOL – Author and retired U.S. Air Force Colonel Terry Finnegan provided an in-depth look into the Battle of Seicheprey, which took place 100 years ago and involved 73 Bristol Soldiers from Company D of the 102nd Infantry Regiment of the “Yankee Division.”

Local veterans, members of the Bristol Historical Society and Mayor Ellen Zoppo-Sassu attended the presentation at American Legion Seicheprey Post 2, which was named after the battle. Before the presentation, guests stopped to inspect photos, uniforms, gear and letters from World War I which the Memorial Military Museum displayed on a table.

As he began his presentation, Finnegan stressed that Connecticut soldiers led the way for the U.S. Military into the 20th Century. However, during Seicheprey, they were stationed in “sacrifice posts” by French command and told not to retreat.

The audience was shown photos of the trenches, maps of troop movements and aerial shots of the village of Seicheprey. They were also shown aircraft and artillery used by both sides of the battle and images of the German and U.S officers involved and their quotes regarding the conflict.

They presentation featured stories of individual soldiers who fought bravely and earned praise from friend and foe.

One such man, Private First Class Louis Ziegra was running supplies when he was ambushed by 30 Germans. The Germans had to dog pile on him to drag him away as a prisoner. German General Max Karl Wilhelm von Gallwitz remarked that Ziegra had “defended himself mightily and refused all testimony.” He was later awarded a Purple Heart.

“Now, it seems that the only veteran remembered from World War II is Sergeant Stubby, the war dog,” said Finnegan. “Don’t get me wrong, I love Stubby, but I think it is important for us to better recognize and commemorate our veterans.”

Finnegan noted that his grandfather had been a medic at Seicheprey and was also the longest serving National Guard member to fight in World War I.

Finnegan also explained how the Germans achieved their victory. They could look down on the U.S. troops from Butte de Montsec and fire upon them with their artillery whenever they tried to move. They cut off most communications and monitored others. Their fast moving artillery fired a heavy barrage of explosives and poison gas.

The Germans completely surrounded the village of Seicheprey and then moved in to fight hand to hand. The American soldiers fought back fiercely. The Germans attacked at 3 a.m. and didn’t pull back until 8 a.m. Due to communications being cut off, there was no way to contact the allied 103rd Field Artillery Division, which then fired on allied troops in Seicheprey believing Germans to still be there.

“The artillery division never lived it down and they were known from then on as ‘The Kaiser’s Own,’” said Finnegan.

In the aftermath of the battle, eight Bristol men were killed, 18 were wounded and there were five prisoners of war. In total, 173 Americans and five officers were captured. Despite a photo of the prisoners being circulated for propaganda, the number of prisoners also signaled to German command that they would soon lose the war.

In conclusion, Finnegan urged those who attended the program “don’t forget your heritage.” He encouraged those who wish to view this presentation, to visit his website, terrencefinnegan.com.