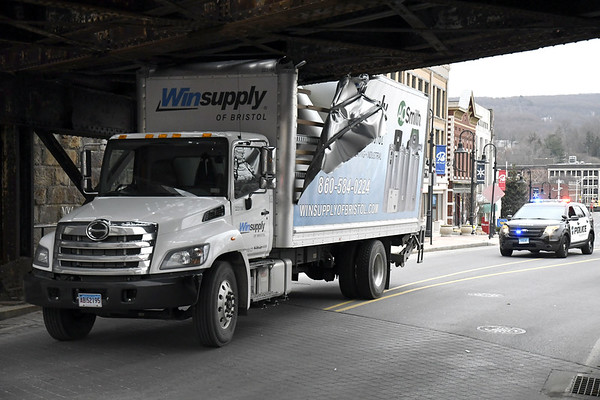 12/22/2017 Mike Orazzi | Staff A stuck truck after crashing into the railroad underpass on Main Street in Bristol Friday morning. Buy this photo
Published on Wednesday, 20 December 2017 21:46
Written by JUSTIN MUSZYNSKI

BRISTOL - A middle-aged man was taken to the hospital Wednesday after the car he was driving left the roadway and crashed down an embankment.

Police, firefighters and an ambulance responded to Barlow Street, near the Terryville Road intersection, at about 3:57 p.m. First responders found a man unconscious inside a Chevy Sedan, suffering from a head injury. The doors were locked.

Firefighters broke a few of the Chevy’s windows to get access to the victim, who was taken on a stretcher to a nearby ambulance. He was transported to an area hospital for injuries that were not considered life-threatening.

Dep. Fire Chief John Ziogas said it appeared as though the Chevy was heading up Barlow Street when, for unknown reasons, it left the road and went down a 10-foot embankment. He speculated that the driver could have suffered a medical emergency.

The vehicle sustained heavy damage and had to be towed from the scene.