Lorenzo Burgio | Staff Democrat Ellen Zoppo-Sassu enjoys the moment at the Polish American Club after being elected as the first female mayor of Bristol. Buy this photo 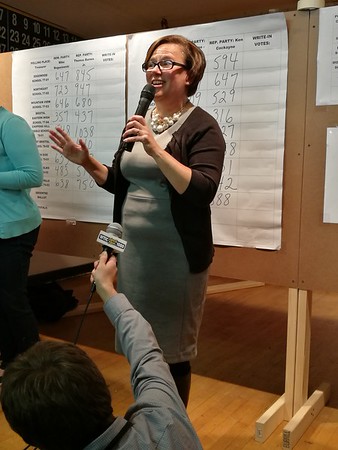 Lorenzo Burgio Democrat Ellen Zoppo-Sassu at the Polish American Club after being elected as the first female mayor of the City of Bristol with the Democratic City Councilors who took the majority. Buy this photo

BRISTOL - Ellen Zoppo-Sassu was elected as the cityâ€™s first female mayor, and Democrats took a majority of seats on the City Council Tuesday night.

The contentious mayoral race between Zoppo-Sassu and Republican incumbent Ken Cockayne ended Tuesday night with the 6,413 votes in favor of Zoppo-Sassu and 5,030 for Cockayne, according to the unofficial count by the registrars.

Also, Democrats took control of the City Council by a 5-1 margin Tuesday night.

â€śWe are so excited about the results and canâ€™t wait to get to work next week,â€ť Zoppo-Sassu said. â€śThis has been a long and hard campaign over six months and we tried very hard to stick to the issues of what is important and where this community is headed.

â€śIâ€™m so thankful for all of the great people who have come out to support us, especially the ones who made a statement by coming to headquarters and telling us that it was important that their voices were heard. We had so many new faces of all ages and across all socioeconomic and demographic categories. To the voters who did not support us, I welcome their input and conversation as well because we all have one goal and that is to improve our community.â€ť

Republican candidates were at Nuchieâ€™s restaurant to hear the results where Cockayne told supporters, â€śItâ€™s been a pleasure serving as your mayor.â€ť

â€śThe good thing that my opponent has to look forward to is how well I have set her up for the next term,â€ť he said. â€śThank you everyone, itâ€™s been a great run. I set up my opponent for the next two years. She can sit back and enjoy the ride because we did all the hard work,â€ť Cockayne added.

In the council races, Democrats Josh Medeiros and Greg Hahn were elected in District 1.

As of Monday, there were 34,280 eligible voters in Bristol: 12,740 Democrats, 6,911 Republicans, 14,024 unaffiliated and 605 registered with the Green and Working Families Parties, according to the city registrar of voters.

Lorenzo Burgio can be reached at lburgio@centralctcommunications.com or 860-973-5088.