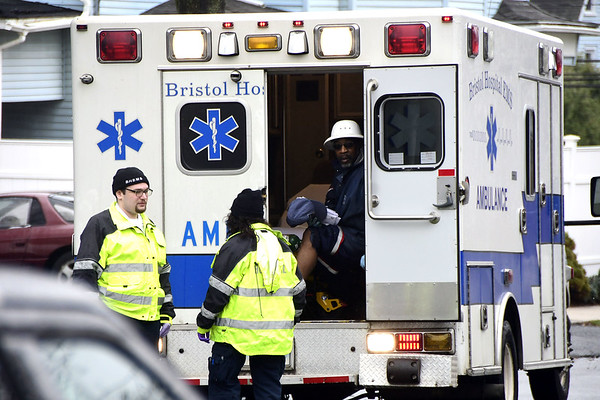 A Bristol postal carrier while beating treated after being bitten on the leg by a fox on Goodwin Street in Bristol while on his route. The fox was located and shot by Bristol animal control and will be sent off to rabies testing. Mike Orazzi | Staff Buy this photo
Published on Thursday, 6 April 2017 20:04
Written by JUSTIN MUSZYNSKI

BRISTOL - A mailman was bit Thursday afternoon when a possibly rabid fox attacked him.

The fox was later shot and killed by animal control.

Police, an animal control officer and an ambulance crew responded shortly before 4 p.m. to 24-26 Goodwin St. after a mailman there was bitten on the calf by a fox. The victim was treated at the scene before leaving to get a rabies vaccination.

An animal control officer and police spent several minutes looking for the fox, which was hiding under the porch of the home behind latticework. After getting a clear shot, an ACO killed the fox.

The fox will be tested for rabies.

Neighbors in the area said the animal has been a problem in the neighborhood recently.

According to an ACO, the fox is believed to have had another encounter with a person who was not bitten and may have tried attacking someone’s dog. He said it’s likely the fox, which smelled like a skunk, was transmitted rabies through a skunk it had eaten.